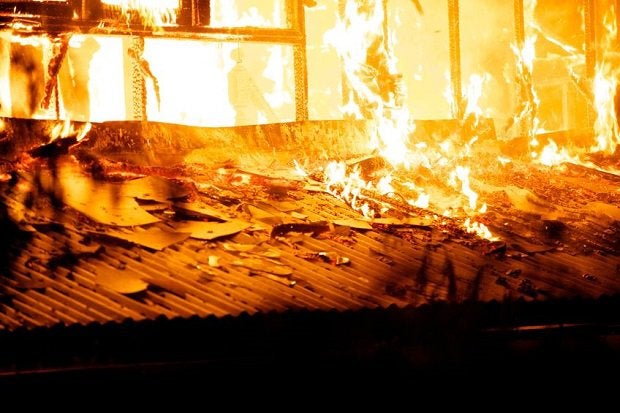 CEBU CITY — Aid is being given to 259 families who lost their homes in a fire in Barangay Tisa in Cebu City, last Monday even as the city government is investigating the cause of the fire said to have been triggered by a couple’s fight.

Four sitios of Barangay Tisa in Cebu City have been placed under a state of calamity after the 7-hour fire rendered at least 259 families homeless.

The dawn fire burned down 185 houses located in the boundaries of Barangays Tisa and Labangon. Authorities estimate the damage to reach P1.5 million.

No one was seriously injured.

The four affected  sitios in Barangay Tisa were Lutaw-lutaw, Tacao, Luhai, and Kauswagan.

City Hall’s Department of Social Welfare and Services (DSWS) immediately provided food to the affected residents, many of whom occupied the gymnasiums in the two affected barangays.

Each affected family is getting P20,000 from the Cebu City government.

Barangay Tisa Captain Philip Zafra said they received reports that a couple had a confrontation, prompting the husband to throw a lighted lamp at his wife inside their residence.

Investigators have sought out the man and his wife to give them a chance to air their side on reports that their fight triggered the destructive fire.

Another information they received was that their child was left alone in the house lighted by a lamp that accidentally fell past midnight on Monday.

Zafra has immediately called on the couple to appear at his office and explain.

After about an hour, he declared a Task Force Alpha, calling fire trucks from other cities to help Cebu City firefighters put out the blaze.

As the Fire Prevention Month approaches, Bongabong is urging people to be fire-safety conscious at all times.

Monday’s fire was the biggest in Cebu City since January 2017.

Majority of the fires in Cebu City were caused by faulty electrical wiring and unattended open flame like lighted candles, the BFP-Cebu City record showed.

Bongabong encouraged the public to be extra-careful and to invest in early warning devices like smoke detectors and heat sensors.

He said each house should have fire extinguishers and alternative exit doors.

Zafra appealed to people to assist those affected by the fire.

“What they need now are toiletries, blanket, mats, pillows, water, and used clothing,” he said.

Eleuterio Duazo, 58, said he was sound asleep inside his room when he heard a commotion from outside.

He said he quickly got up and saw the huge blaze near their house. Duazo immediately ran for safety.

“I am happy that nothing bad happened to me,” said Duazo whose wife went home to Tuburan town when the fire broke out.

He appealed to authorities to conduct a thorough investigation and, if validated, to file charges against the couple who reportedly caused the fire.

“I want them to answer for what they did),” Duazo said.  SFM/rga