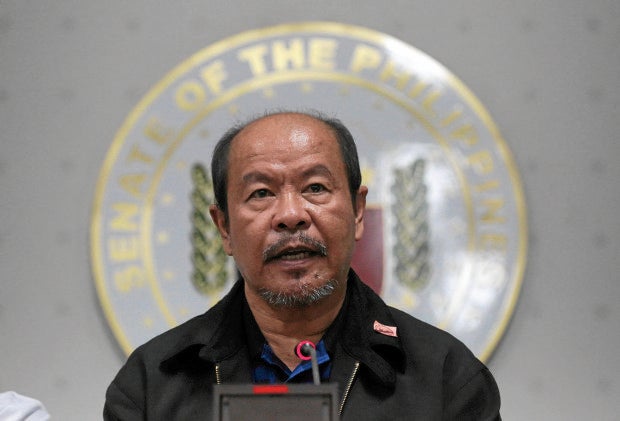 President Duterte treated retired police officer Arturo Lascañas “like a brother,” according to the first hit man to link the Philippine leader to extrajudicial killings in Davao City.

Edgar Matobato, the confessed hit man who surfaced last September and testified in the Senate that Mr. Duterte, when he was mayor of Davao, was the brains behind the extrajudicial killings in the city, described Lascañas as one of the leaders of a brutal liquidation team that became known as Davao Death Squad (DDS).

Matobato’s testimony could corroborate Lascañas’ account of the Davao killings.

During his first appearance in the Senate last year, Lascañas denied that there was a hit squad in Davao.

But in an about-face during a news conference in the Senate on Monday, Lascañas said the liquidation squad was real and that it carried out assassinations under the instruction of Mr. Duterte and that the then mayor paid him and other hit men for the killings.

Explaining his change of heart, Lascañas said he was bothered by his conscience after lying under oath.

His disclosures echoed Matobato’s shocking allegations against Mr. Duterte, including ordering the murder of radio commentator Juan Pala Jr. and attacks on mosques in Davao City in retaliation for the bombing of a Catholic cathedral in 1993.

In his affidavit dated Dec. 7, 2016, filed two days later in the Office of the Ombudsman as part of his complaint against Mr. Duterte, Matobato narrates Lascañas’ central role in the DDS, describing the then police officer as his boss in the hit squad.

“Our team leader in the DDS is SPO3 Arturo Lascañas,” Matobato says in his affidavit.

He identifies Lascañas as one of two right-hand men of Mr. Duterte, the other one being retired SPO4 Sanson Buenaventura.

“Lascañas was the one who gave the orders on who are to be killed after clearance is given by the mayor (Duterte). As far as I knew, we cannot kill just anybody if it was not ordered, approved and cleared by Duterte,” Matobato says.

He says he served as “personal bodyguard” for Lascañas and, being always present in his meetings with Mr. Duterte, he witnessed how close they were.

“Duterte treated him like a brother. He once told Lascañas: ‘If not for you, Davao will be nothing. Davao will not be peaceful,’” Matobato says.

He says Lascañas, while not an official, “can be considered  the most powerful policeman in Davao City,” as all the orders of Mr. Duterte passed through him.

It was also Lascañas who required that all the victims of the hit squad be chopped into pieces, Matobato says, describing how the bodies were disposed of.

“Lascañas was strict in requiring that the bodies should be chopped up. It’s not enough that they are shot or strangled. If a victim is tall, we cut off the legs, limbs and head,” he says.

In parallels with Lascañas’ own admissions, Matobato places the policeman in several hit squad operations, saying Lascañas was part of the planning and execution of these hits.