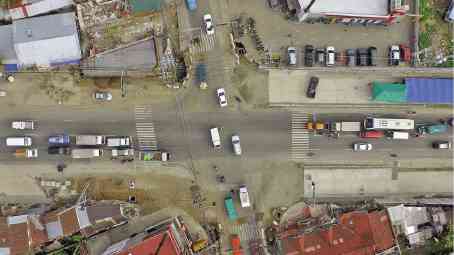 An underpass will be constructed along this section of the Maharlika Highway in Lucena City, where vehicles going to and coming from the Bicol region pass through. –DELFIN T. MALLARI JR.

LUCENA CITY — The construction of a new highway linking Quezon province and the South Luzon Expressway (SLEx) will start this year after the Department of Public Works and Highways (DPWH) completed the acquisition of road right of way, according to Public Works Secretary Mark Villar.

Villar, who attended the ground breaking ceremony for the P230-million underpass along Maharlika Highway here on Tuesday, said the 58-kilometer SLEx Toll Road 4 (TR4) would be connected to another proposed highway.

“The Quezon-Bicol expressway (QuBEx) will soon follow. We will immediately start its construction after we complete the alignment of the route for faster travel,” Villar said.

He said the DPWH was also finalizing the funding for the proposed QuBEx.

“It can be through PPP (Public-Private Partnership) or a foreign-funded loan,” Villar said.

The four-lane expressway project will cut travel time from Sto. Tomas town in Batangas to Lucena City from four hours to an hour, according to the DPWH. 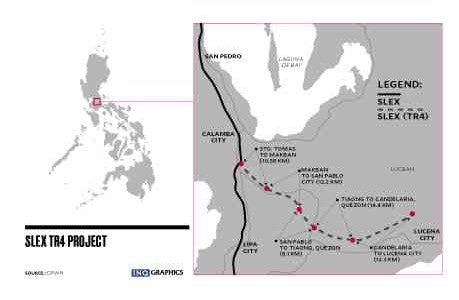 The project will be undertaken by the South Luzon Tollways Corp., a unit of San Miguel Corp., under the PPP program.

The DPWH is also building an underpass along the Maharlika Highway diversion road in Lucena City to ease traffic flow along the busy Manila-Bicol route.

“With the completion of the underpass, at least 70 percent of the [total number of vehicles using the route] will no longer stop at the intersection and continue their travel unhampered,” said Nestor Cleofas, DPWH Lucena City district engineer.

The underpass will span 419 meters, starting from a section past the Dumacaa Bridge and ending before the approach of the Iyam Bridge.

Buses from the nearby Lucena Grand Terminal, where several local offices of national government agencies are located, contribute to the daily gridlock on the intersection in Barangay Gulang-Gulang. Vehicles going to Tayabas City and Lucban town also pass through this area.

Jeepney driver Rodelio Reyes described the impending construction of the underpass as impyerno papuntang langit (hell that leads to heaven).

He said they expected traffic jams would worsen during the project’s construction. “But after that, I’m sure we will see traffic flow improve along that section,” he said.

Villar said this project was among DPWH’s initiatives to decongest traffic in the country.

“From north to south, the government will be constructing more than 200 diversion roads nationwide,” Villar said.

Cleofas said the first phase of the underpass project, with a budget of P100 million, would be completed in eight months.

“If the remaining P130 million of the project fund will be released immediately, this [underpass] will be finished in the middle of next year,” he said.