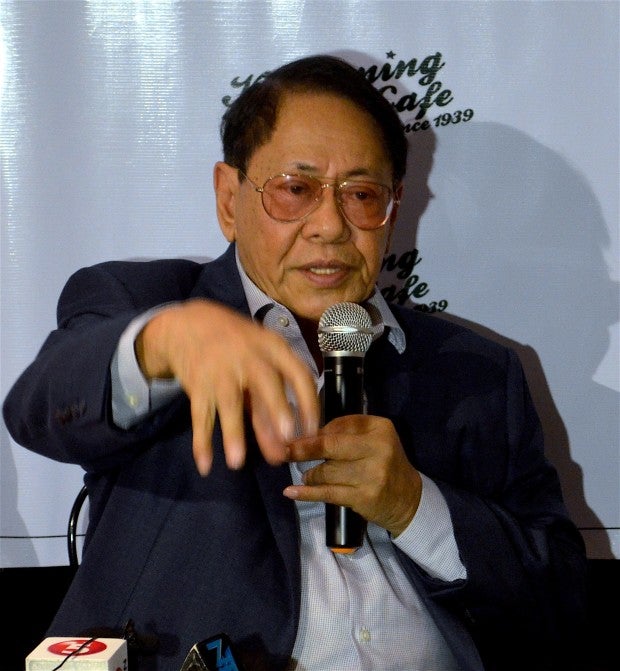 MANILA, Philippines — Former Senate President Edgardo Angara and National Artist for Literature F. Sionil Jose will launch on Friday a compendium of the Filipino intelligentsia, an elite club of intellectuals that aims to promote Philippine culture and provide a platform for discussions on national advancement.

The Academia Filipina, an exclusive club that aims to “promote and protect Filipino culture as the bedrock of the Filipino nation,” is touted to bring together national artists and other standout Filipinos in their respective professions to serve as a catalyst for cultural development.

“We’re not able to harness the talent of our own people. Despite the abundance of talent in the country… we should have been first world by now,” Angara told the Inquirer in a recent interview.

Patterned after exclusive clubs and intellectual academies around the world, Jose said the Academia aims to bring together a diverse group of people to initiate a dialogue geared towards national development.

“I also hope that the diversity will help unite not divide us. Among other things, the Academia will promote research in the sciences and the humanities that will help build a free, just and prosperous society,” he said in explaining the rationale for the club in a short writeup.

At its launch, the Academia will have 39 members, a roster of the most recognizable and influential names in the areas of politics, the arts, literature, journalism, law, and the academe.

As part of its mission to promote and preserve Philippine arts and culture, the Academia aims to push for the creation of a Department of Culture “to oversee all cultural institutions.”

It also aims to “support research in the sciences and in the humanities,” “critique public and private initiatives in cultural development,” support legislative efforts on the construction of monuments and naming of streets and communities, and “sponsor seminars, lectures and the publication of books on cultural and national issues.”

The launch will be held at the Ramon Magsaysay Center on Friday morning. JE