More tests needed on Russian UN ambassador’s cause of death 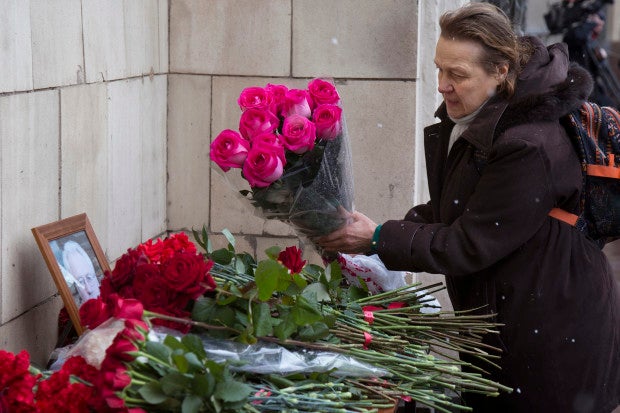 A woman pays her last respect as she offers flowers in front of the portrait of the Russian Ambassador to the United Nations Vitaly Churkin outside the Foreign Ministry headquarters in Moscow, Russia, Tuesday, Feb. 21, 2017. Churkin who died suddenly Monday after falling ill at his office at Russia’s UN mission is being remembered by his diplomatic colleagues as a powerful and passionate voice for his nation. AP

NEW YORK — Medical examiners who performed an autopsy on Russia’s ambassador to the United Nations said Tuesday that more tests are needed to determine how and why he fell ill in his office and later died.

Vitaly Churkin, who died Monday at a hospital at age 64, had been Russia’s envoy at the UN since 2006. He was the longest-serving ambassador on the Security Council, the UN’s most powerful body.

The medical examiner is responsible for investigating deaths that occur by criminal violence, by accident, by suicide, suddenly or when the person seemed healthy or in any unusual or suspicious manner. Most of the deaths investigated by the office are not suspicious.

Churkin’s case was referred to the medical examiner’s office by the hospital.

Moscow has not given a date for Churkin’s funeral.

Churkin’s death brought condolences from diplomats and leaders around the world, with Republican US President Donald Trump calling him “an accomplished diplomat.”

“While American officials sometimes disagreed with their Russian counterparts, Ambassador Churkin played a crucial role in working with the United States on a number of key issues to advance global security,” Trump said in a statement.

Churkin’s counterparts mourned him as a master in their field, saying he was deeply knowledgeable about diplomacy and dedicated to his country while also being a personable and witty colleague.

The UN Security Council held a moment of silence Tuesday in Churkin’s memory. The honor was announced by the ambassador from the country holding the Security Council’s rotating presidency, Ukraine, where Russia annexed the Crimean Peninsula in 2014 and has backed separatist rebels fighting government forces.