US sets sweeping crackdown on nearly all illegal immigrants 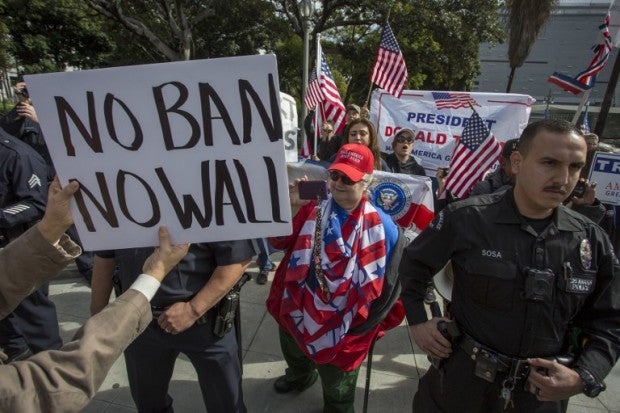 A group of Trump supporters confronts marchers during the Immigrants Make America Great March to protest actions being taken by the Trump administration on Feb. 18, 2017 in Los Angeles, California. Protesters are calling for an end to stepped up ICE raids and deportations, and that health care be provided for documented and undocumented people. AFP

WASHINGTON, United States — The Department of Homeland Security issued tough new orders Tuesday to begin a sweeping crackdown on illegal immigrants, putting nearly all of the country’s 11 million undocumented foreigners in their cross-hairs.

Two memos issued by DHS Secretary John Kelly order border patrol and immigration officers to deport as quickly as possible any illegal immigrants they find, with only a few exceptions, principally children.

The priority for deportation will remain undocumented immigrants convicted of crimes, but will also include anyone who has been charged or potentially faces criminal charges.

However, categories of illegal immigrants deemed as low priority by the previous Barack Obama administration — generally anyone not tied to a crime — are no longer protected.

“With extremely limited exceptions, DHS will not exempt classes or categories of removal aliens from potential enforcement,” the department said.

“All of those in violation of the immigration laws may be subject to enforcement proceedings, up to and including removal from the United States.”

Kelly ordered immediate action to begin planning and building a wall along the US southern border with Mexico.

He also ordered the hiring of another 5,000 officers for the Customs and Border Protection agency and 10,000 for the Immigration and Customs Enforcement agency.

Soon after being inaugurated president on January 20, Trump ordered action to begin construction of a wall along the nearly 2,000-mile-long (3,145 kilometer) US-Mexico border, a tightening of border security, and tougher enforcement against illegal immigrants inside the country.

The memos come ahead of meetings this week between Kelly and US Secretary of State Rex Tillerson and Mexican President Enrique Pena Nieto in Mexico.

Besides Pena Nieto, the two American officials will meet with Mexico’s ministers of the interior, foreign affairs, finance, defense and the navy, the State Department said.

Key topics include border security, law enforcement operation and trade, according to a State Department statement.

The new rules make it easier for ICE and CBP officials to automatically expel undocumented immigrants. Kelly said the mass detentions of the past, requiring judicial review, have overburdened the government.

“The surge of illegal immigration at the southern border has overwhelmed federal agencies and resources and has created a significant national security vulnerability to the United States,” he said in one of the memos.

“Thousands of aliens apprehended at the border, placed in removal proceedings, and released from custody have absconded and failed to appear at their removal hearings. Immigration courts are experiencing a historic backlog of removal cases.”

“These memos confirm that the Trump administration is willing to trample on due process, human decency, the well-being of our communities, and even protections for vulnerable children, in pursuit of a hyper-aggressive mass deportation policy,” said Omar Jadwat, director of the Immigrants’ Rights Project at the American Civil Liberties Union.

“However, President Trump does not have the last word here — the courts and the public will not allow this un-American dream to become reality,” he said. CBB