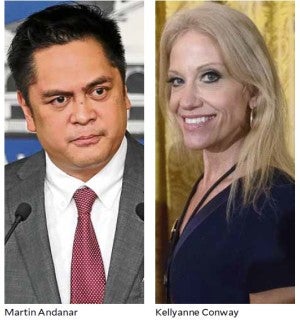 A thousand dollars just to cover a press conference in the Senate?

That can only be “Kellyandanar Conway with alternative facts,” Akbayan Rep. Tom Villarin said on Tuesday, commenting on Presidential Communications Secretary Martin Andanar’s report on Monday that Senate reporters were offered $1,000 (P50,250) to cover a news conference where a retired police officer linked President Duterte to extrajudicial killings in Davao when he was mayor of the city.

Conway has gone on to raise questions about her own competence, referring in media interviews to a massacre in the United States that never happened and pitching for presidential daughter Ivanka Trump’s merchandise, which has raised ethical issues.

Albay Rep. Edcel Lagman said Andanar “must be either dreaming or having a nightmare” when he claimed in a television interview on Monday that he had received information about the opposition’s attempt to bribe Senate reporters to cover retired police officer Arthur Lascañas’ news conference.

“I don’t know whether the statement of Andanar has factual basis,” Lagman said.

The Senate reporters issued a collective statement challenging Andanar to prove his allegation and demanding an apology for putting their and their news organizations’ integrity under a cloud.

Andanar, a former TV5 news reader, refused to apologize, insisting he got his information from “intelligence reports.”

He also flared up at Inquirer reporter Marlon Ramos when pressed on the basis of his claim that there was a plot to unseat Mr. Duterte.

Andanar said in a statement on Monday that Lascañas’ admission of killing for Mr. Duterte for pay was “part of a protracted political drama” aimed at toppling Mr. Duterte from power.

Speaking at a news briefing in Malacañang on Tuesday, the official reiterated his statement in his television interview that there was nothing in the intelligence report that said any Senate reporters accepted money to cover Lascañas’ press conference.

“That proves that the reporters at the Senate are good reporters and they stuck to their journalistic integrity,” he said.

Andanar said he had verified the information, but did not explain why the bribe offered to the reporters was in dollars and not pesos.

Andanar lost his cool when Ramos asked him about the basis of his statement that there was a plot to bring down Mr. Duterte when National Security Adviser Hermogenes Esperon and Defense Secretary Delfin Lorenzana had already dismissed such claims.

He retorted that there was classified information and reports that did not reach everyone in the government. He said, however, that he would ask Cabinet members who had received the report if he could release details from it.

Ramos asked him if it was possible that sensitive information like a plot against the President could have failed to reach the national security adviser. Andanar replied, “Don’t pit us against each other, Marlon.”

He went on: “Again, you will write something and you say this was what Andanar said. We in the Cabinet have information we receive which we share because we’re open, we’re very transparent.”

Ramos replied that he was just asking for clarification, but Andanar insisted that the reporter was trying to create conflict between him and other officials. “Don’t do that,” Andanar said.

Ramos told Andanar that as a former journalist, he should know when a reporter was seeking clarification.

Andanar countered: “Let me ask you: Are you fair [in] everything you write?”

Ramos replied in the affirmative.

“How about your posts on social media?” Andanar asked.

Ramos said those were his personal views.

But Andanar had more to say. “As a reporter, you are an ambassador of your newspaper,” he said.

Andanar writes a column in the Inquirer. —WITH A REPORT FROM CHRISTINE O. AVENDAÑO