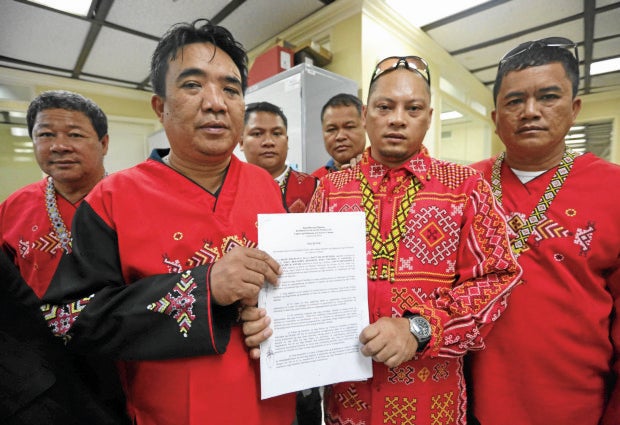 BIAS AGAINST MINING Tribal chieftains file their opposition to the confirmation of Environment Secretary Gina Lopez by the Commission on Appointments, citing her bias against large-scale miners in the country. —MARIANNE BERMUDEZ

Six tribal chiefs from three towns in Surigao del Sur are opposing the confirmation of Environment Secretary Gina Lopez, even as Manobo tribes in three towns in Agusan del Sur and green groups are endorsing her.

Lopez ordered on Feb. 2 the closure of 23 mines and the suspension of five others for allegedly damaging watersheds and for siltation of coastal waters and farmlands.

On Feb. 14, she ordered the cancellation of 75 mineral production sharing agreements (MPSA) in watershed zones.

The Commission on Appointments’ committee on environment and natural resources has reset for March 1 the confirmation hearing for Lopez, from the earlier schedule set for Wednesday.

In a letter addressed to the commission, the six tribal chiefs cited four reasons for opposing the nomination of Lopez:

Lopez has a bias against mining. And that was why her advocacy of opposing mining is raising confusion on her role of being fair in implementing laws of the Department of Environment and Natural Resources (DENR).

Once mines close down, tribes will go back to the hard life. And because of this, they can easily be tempted to go to groups against the government or go with criminals who are into stealing, kidnapping, illegal drugs, illegal logging and other illegal activities just to survive.

All tribes in the towns of Carrascal, Cantilan and Madrid of Surigao del Sur support mining because it provides our communities roads, schools, free medicine and health services and all things needed for modern living. Mining also provides jobs and benefits the local economy, including the Catholic Church. So, it is not true what Lopez keeps on saying that indigenous groups are against mining.

The continued stay of Lopez in the DENR will mean the ban on mining and the shutdown of mines in Surigao del Sur and will result in the loss of benefits enjoyed by indigenous people that included among others, annual royalty share of P18 million, scholarship for 200 students and free ambulance for indigenous people.

But the planned closures and the suspension of mines will affect about 1.2 million people, including families and businesses that rely on mining for a livelihood, according to Artemio Disini, head of the Chamber of Mines of the Philippines.

“We believe Secretary Gina will find the balance between the environment and business to the betterment of our country,” the group said in a letter sent to the Commission on Appointments.

While mining firms are blocking the confirmation of Lopez, environmental groups are supporting her.

The Save Sierra Madre Network Alliance Inc. (SSMNAI), a coalition of more than 70 environmental groups, has appealed to the public to speak up and show up for the confirmation of Lopez.

“Please make a heroic stance to campaign for Gina,” SSMNAI chair Fr. Pete Montallana said in a letter circulating among green groups and the media.

Montallana urged supporters to make their positions known by writing a letter to President Duterte, who appointed Lopez, and the Commission on Appointments; to talk to congressional representatives to express support for Lopez; or to put up signs expressing support for Lopez in their offices.

“We also need warm bodies to bring Gina Lopez to the Senate on March 1 to convince the [Commission on Appointments] that there is a groundswell of support for Gina. Join us,” he added.

In a previous letter sent to President Duterte and the Commission on Appointments, Montallana pointed out that “under the leadership of [Lopez], the DENR started to regain the trust of nongovernment organizations, peoples’ organizations, indigenous peoples and civil society organizations.”

A coalition of antimining advocates and communities has also lent their voices to support Lopez.

“It is high time that we get a DENR secretary who is biased for the environment and for social justice,” said Alyansa Tigil Mina national coordinator Jaybee Garganera in a statement.