A tourist bus ferrying mostly college students on a camping trip on Monday lost its brakes and hurtled downhill in Tanay, Rizal province, rammed an electric post and left 13 of its passengers and the driver dead, authorities said.

Ten of the victims were killed on the spot and four others died in two hospitals, said Tanay disaster response officer Berlito Bati Jr.

More than 40 others were injured and taken to hospitals, with several of them in critical condition, municipal officials said.

Bati, who was among those who helped pull the victims from the bus wreckage, said many of the dead were piled in a heap of bodies in front of the passenger cabin.

The impact was so strong it ripped off a large chunk of the roof of the bus and scattered around the victims’ belongings.

Garbage truck driver Danny Gutierrez said some of the survivors wept, while others suffering from broken legs and cuts were too shocked to speak.

“She shouldn’t have joined,” Myrna Cerezo said of her 20-year-old daughter Jonafhay, whom she held in her arms at San Isidro Funeral in Tanay.

Cerezo found her daughter sprawled on the floor beside nine other fatalities. Three others who died remained in hospitals. 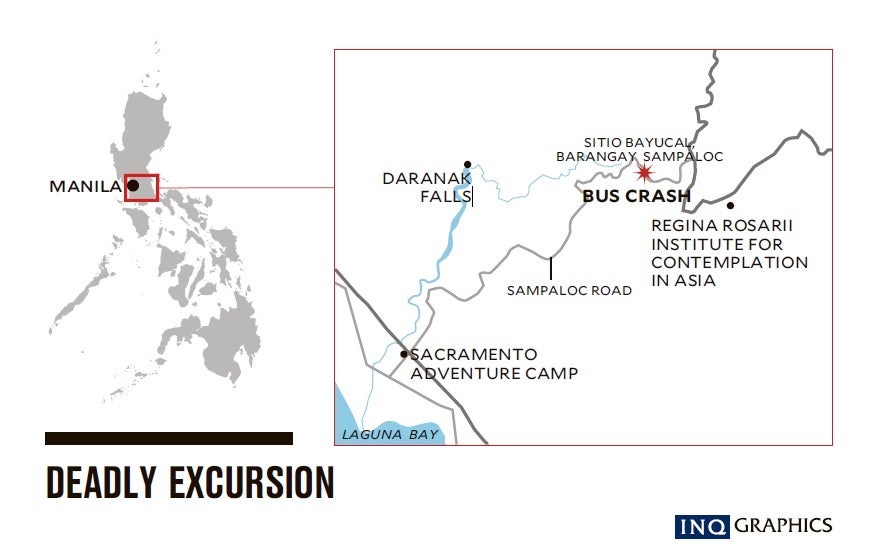 The bus, owned by Panda Coach Tours, carried at least 58 passengers, including the students and teachers of Bestlink College of the Philippines. The bus set out in a convoy of nine vehicles at daybreak.

Supt. Christopher dela Peña, Tanay police chief, said the blue bus was traveling downhill on an accident-prone dead curve near Magnetic Hill in Sitio Bayucal at Barangay Sampaloc in Tanay when the bus apparently lost its brakes around
8:45 a.m.

The bus raked barriers located near the road-widening area and slammed onto a Meralco post and a tree.

Carlos Inofre of the Tanay town government said the driver deliberately hit a roadside post to stop the bus.

“They could have been running too fast that when they hit the post, the impact was too strong the roof of the bus almost got detached,” Inofre said.

Nenita Ragua, mother of a survivor, said her daughter and the other passengers recalled smelling something like burning tires and shouted to tell the driver, but the bus continued speeding downhill.

Ragua, thankful her daughter survived, cried as she remembered and grieved for the others who died. “They should have given the students a better vehicle,” she said.

Relatives had a hard time identifying the dead, some of whose faces were shattered beyond recognition, disaster response officials said.

Siringan’s brother Ryan, who rushed to the funeral parlor from his office at the Armed Forces of the Philippines headquarters, had only good things to say about Lovely, 27, his older sister. 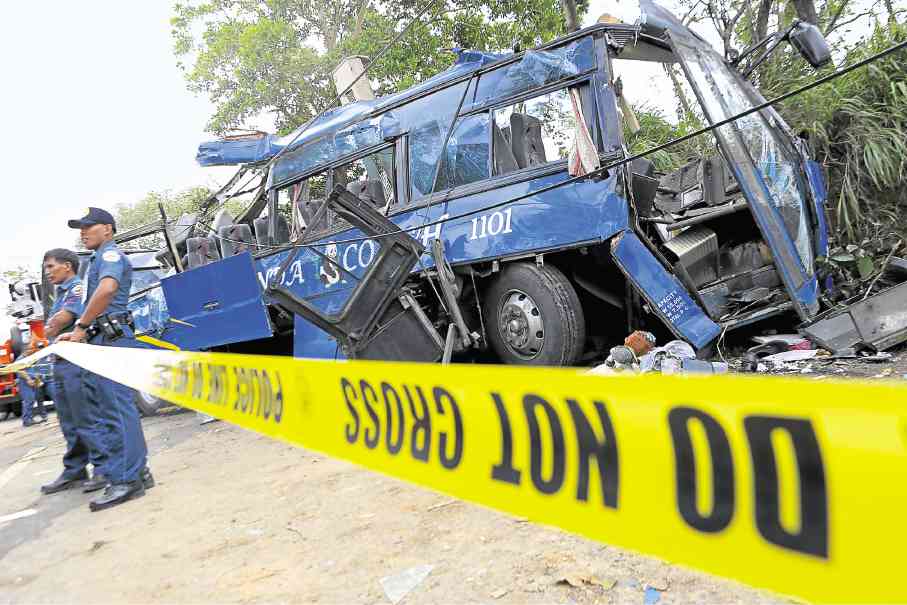 TREACHEROUS ZIGZAG A research and camping excursion of Bestlink College of the Philippines ended in tragedy on a treacherous zigzag in Tanay, Rizal, on Monday. —NIÑO JESUS ORBETA

Lovely, a first year student of Bestlink, died on the spot after her head was crushed.

“My ate was a very good sister. She stopped and worked abroad as a domestic helper to help us, so we can finish schooling. Now, she really wanted to go back to school as a freshman. She studied information technology, just like me,” said the brother, who last saw Lovely a month ago.

The students were bound for a camping activity at Sacramento Adventure Camp in Tanay.

A school official, who requested anonymity for lack of authority to speak to reporters, said the victims were supposed to attend a camping tour in a resort in Tanay as part of the National Service Training Program.

“There were nine buses all in all. The rest of the students were safe and were already at the resort,” she told the Inquirer by phone.

A student said they left Bestlink College around 6 a.m.

Bati said one of the injured was taken to the hospital at Camp Mateo Capinpin, six to Tanay General Hospital, one to Tanay Community Hospital, 17 to Tanay Provincial Hospital, and 13 others to another hospital.

All the victims who suffered serious injuries were transferred to Amang Rodriguez Memorial Medical Center in Marikina City. The injured suffered fractures.

Driver Lacorda’s body was taken to a nearby funeral home after he died shortly before noon.

Lacorda was stuck in the gas board as rescuers tried to pull him away, said municipal environment officer Monzar Lanzario, who cried during rescue operation. Lacorda lost his two legs, he added.

According to the bus operator, Lacorda has been in the company for only three months.

The Commission on Higher Education (CHEd) said it was forming a task force to look into the bus accident.

For the safety and convenience of students and school personnel, there must be advance and proper coordination with the local government and appropriate clearance from the concerned local government and private offices must be secured prior to the field trip, according to a 2012 CHEd memorandum. 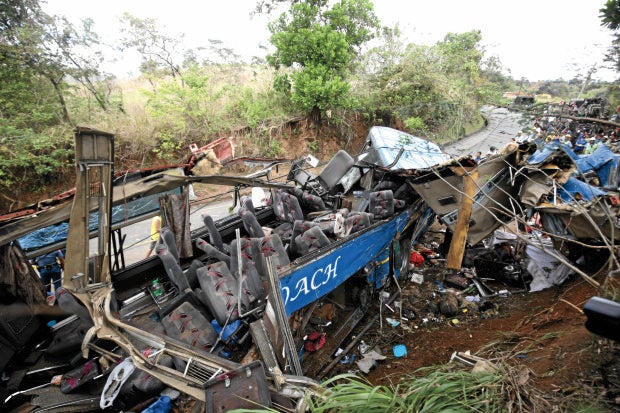 ACCIDENT-PRONE CURVE The ill-fated bus was traveling downhill on an accident-prone dead curve near Magnetic Hill in Sitio Bayucal, at Barangay Sampaloc, in Tanay when it apparently lost its brakes, raking barriers near the road widening area and slammed onto an electric post and a tree. —NIÑO JESUS ORBETA

The Land Transportation Franchising and Regulatory Board (LTFRB) said it planned to issue a preventive suspension order against the bus company, depending on the police report on the incident and a hearing to be conducted on Tuesday next week, according to an LTFRB board member, Aileen Lizada.

Lizada said the bus company had the necessary permits to operate till February 2019.

She also said the victims’ families were entitled to receive the maximum death insurance of P200,000, while the survivors would receive varying amounts depending on their injuries.

Sammy Samsona, Bestlink coordinator for school activities, told the Inquirer in a phone interview that the school was in touch with victims’ families to provide them the appropriate support.

Samsona said that the students’ parents had given consent to the annual “voluntary” activity. —WITH REPORTS FROM JOCELYN R. UY, MARICAR CINCO, JOVIC YEE AND AP