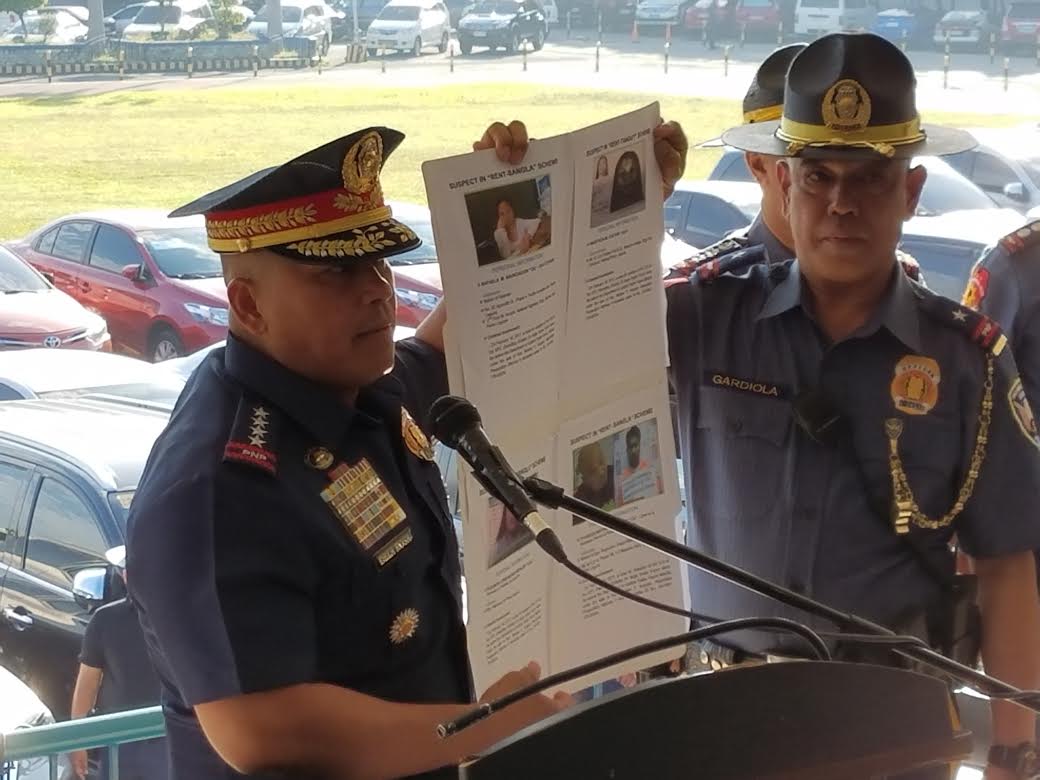 Members of the rent-a-car/pawn syndicate could face economic sabotage charges for the scam, which could run into billions of pesos, said Philippine National Police Director General Ronald dela Rosa.

In a press briefing on Monday, the PNP chief presented to the media 107 of the 457 vehicles of victims that were recovered by the Highway Patrol Group from the syndicate. Dela Rosa personally turned over one of vehicles to its owner.

“This is a huge scam involving billions. Based on our intelligence information, there are more or less 1,800 motor vehicles listed to be involved in this scheme,” Dela Rosa said.

“Let’s just say one SUV costs P1 million, then this scam could involve up to P1.8 billion or even P3 billion. It’s just one syndicate but they have perfected the scheme. And it’s now nationwide because the cars are already being pawned in Mindanao,” he added.

Dela Rosa said banks and lending firms should also explain because one victim was able to obtain loans to buy up to 16 vehicles.

“Maybe they have a contact in the banks. I don’t want to make a conclusion immediately, but to clear the air and get the whole picture, we need statements coming from the banks. One victim was able to get loans for 16 cars but they were not alarmed,” he added.

The PNP chief said their investigation showed that members of the syndicate sweet talked the owners of the cars, mostly sports utility vehicles, into lending their vehicles to them. They were told that these would be used for “Grab” or “Uber.”

“They would sweet talk the owner to enter into a contract and lend a car in exchange for P10,000 to P50,000 (a month). They then use the vehicles they got from the first victim as collateral (and then pawn them),” he said.

The syndicate members would make good on their payment to the car owners during the first three months but would then disappear afterward when the cars had been pawned. Dela Rosa said some victims of the syndicate were policemen.

“The vehicles were mostly Mitsubishi Pajeros, Toyota Fortuners, Toyota Innovas and Toyota Vioses,” all 2016 or 2017 models, he added.

Read Next
MMDA recruits volunteers to help out traffic aides
EDITORS' PICK
House energy committee chair Arroyo bats for cheap electricity
Reignite your passion with the vivo Y35
Individuals affected by ‘Karding’ now over 157,000
Karding damage to infrastructure at P23M
Bongbong Marcos says PH ‘open for business’ with new Clark Airport terminal
Newbie gamers are in for a treat with the power-packed feature of vivo Y16
MOST READ
LPA enters PAR, may develop into tropical depression
Angelica Panganiban ‘duguan, sugatang mom’ one week into breastfeeding
Security guard shoots 2 other guards dead inside Makati subdivision
Badoy not with Office of the President, NTF-Elcac, under Marcos admin — solon
Don't miss out on the latest news and information.