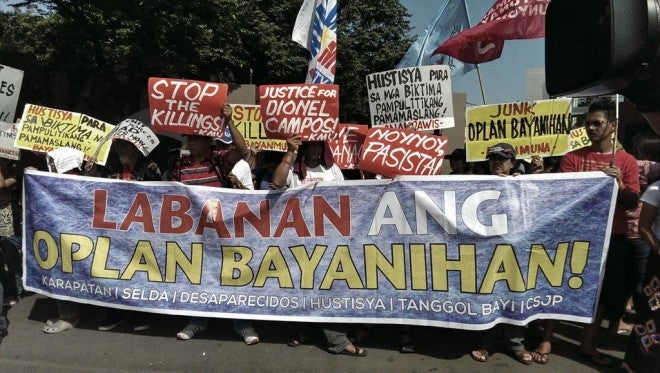 Karapatan secretary-general Cristina Palabay said five of of the eight victims from February 3 to February 17 were activists or members of farmers and activist groups.

“From February 3 to February 17, 2017, Karapatan has documented at least eight (8) victims of political killings, most recently involving Edweno Catog, a farmer and member of a local peasant organization in Pantukan, Compostela Valley,” Palabay said in a statement

On February 16, Catog was shot in public in the highway intersection of Barangay Fuentes by suspected state security forces. He had four gunshot wounds and was pronounced dead after being brought to the Pantukan Public Hospital.

Palabay said that, with the killing of Catog, the total number of political killings in the eight-month-old Duterte administration has reached 31.

On February 11, two small-scale miners, Pepito Tiambong and Jerson Bito, were killed when soldiers sprayed bullets in a mining tunnel, she said.

Four others were injured, including a 15-year-old boy, she added.

In Roxas City, Capiz, farmer Orlando Eslana was killed while five others were injured in a shooting incident on February 11 while farmers were asserting their ownership of the land occupied by the Tan Estate despite the granting of Certificates of Land Ownership Agreement (CLOAs) to farmer-beneficiaries, Palabay said.

“The recent spate of illegal arrests also shows the trend of apprehending activists,” Palabay said, adding that the number of arrests had reached 19 in a span of two weeks.  SFM/rga