58 injured as ship collides with barge 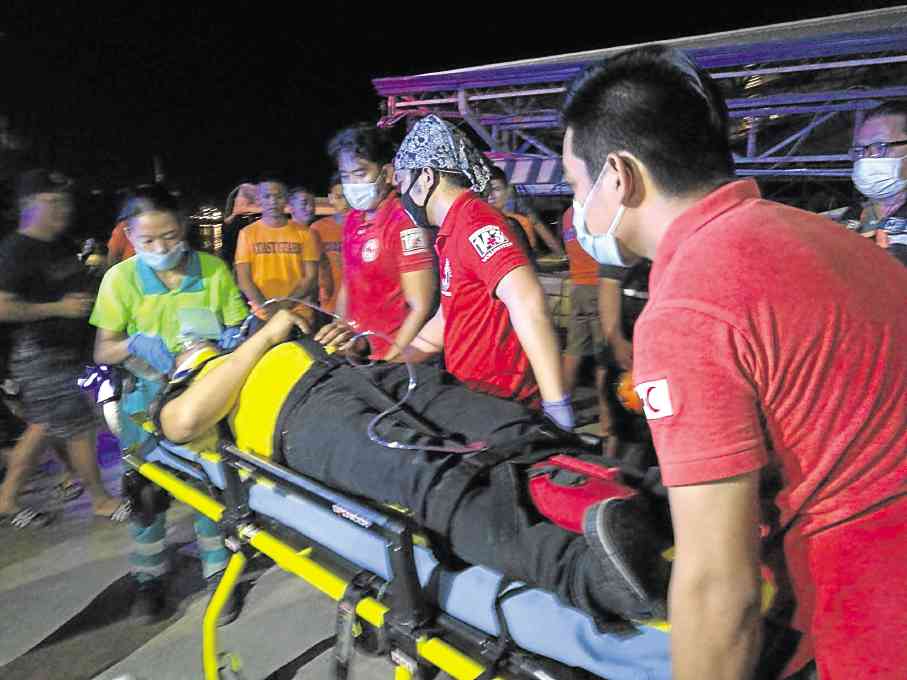 First aid responders carry a passenger of MV St. Braquiel on a stretcher after the vessel collided with a barge carrying empty cases and bottles of beer on Mactan Channel. —CHRISTIAN MANINGO/CEBU DAILY NEWS

CEBU CITY—At least 58 ship passengers were injured when their vessel collided with a barge on the Mactan Channel past 10 p.m. last night.

The vessel, MV St. Braquiel owned by the shipping firm 2Go, crashed into a barge carrying empty cases and bottles of beer and was being towed to port.

St. Braquiel was bound for this city from Ormoc City in Leyte province.

First aid responders were sent to Mactan’s Pier 4 to provide immediate treatment to the wounded passengers.

The ferry was carrying 90 passengers and 11 crewmen when it collided with the barge.

A passenger, Fredamae Bereso, recalled watching a Korean drama on board the business class section of St. Braquiel while waiting for the vessel to dock at Pier 4 here around 10 p.m. on Saturday.

She was jolted by a loud thud while the vessel was approaching the first Mandaue-Mactan Bridge on the Mactan Channel, which separates Cebu from Mactan Island.

Before she realized what was happening, she was thrown into a table and chair.

It turned out that St. Braquiel hit a barge, SMC No. 8, which was carrying cases of beer and owned by Philmarine Services Corp.

Of the 58 passengers injured, 23 had to be brought to hospitals.

Among them is Bereso, who suffered bruises in the face and legs, and Reniero Maurin, captain of St. Braquiel.

“I panicked when I saw what happened to my fellow passengers,” Bereso said.

“Noses were bleeding and I found some teeth on the floor. Others where thrown at the corner of the vessel while some chairs were detached,” she said.

The passengers were told to put on their life jackets.

Another vessel of 2Go, MV St. Jhudiel, was sent to rescue the passengers.

According to Bereso, it took almost two hours for the rescue vessel to arrive, however.

Bereso was among those given first aid on the scene.

The Cebu station of the Philippine Coast Guard (PCG) required the vessel owners to submit marine protests, or reports about the accident.

The barge, bound for Cebu City from Estancia town in Iloilo province, suffered dents on its rear and left portions. The tugboat towing the barge, PSC Matatag, did not suffer any damage.

He said the barge traveled at 2.8 knots. The speed of St. Braquiel is being checked, he added.

According to a PCG report in Manila, St. Braquiel apparently encountered engine trouble when it collided with the barge.