‘With 300 rogue cops in Basilan, AFP can focus on Abu Sayyaf’ 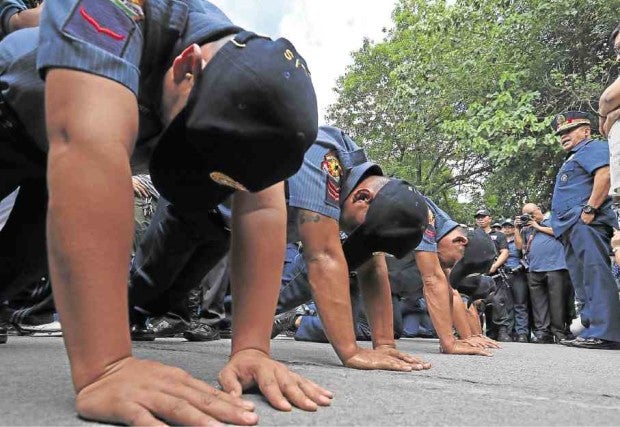 Policemen being linked to crimes committed against Koreans in Angeles City, Pampanga province, are made to do pushups by their boss, Director General Ronald “Bato” dela Rosa, at a recent confrontation between supposedly rogue members of the police force and the national police chief in Camp Crame, the Philippine National Police headquarters. —EDWIN BACASMAS

BAGUIO CITY — The deployment of about 300 rogue policemen to Basilan will be a great help to the military’s campaign against the Abu Sayyaf, Armed Forces of the Philippines chief of staff General Eduardo Año said.

“Their main job is to take care of town centers, urban centers so that the AFP will concentrate in the hinterlands,” he told reporters at a press briefing here on Sunday.

The PNP will send around 300 personnel facing criminal and administrative cases to Basilan on Tuesday as ordered by President Rodrigo Duterte. They will be deployed there for two years.

With the presence of additional policemen, the military can focus on their operations in the hinterlands where the terrorist groups are believed to be hiding, the AFP chief said.

Año said they can now leave to the police some tasks, such as setting up checkpoints and launching civil-military undertakings.