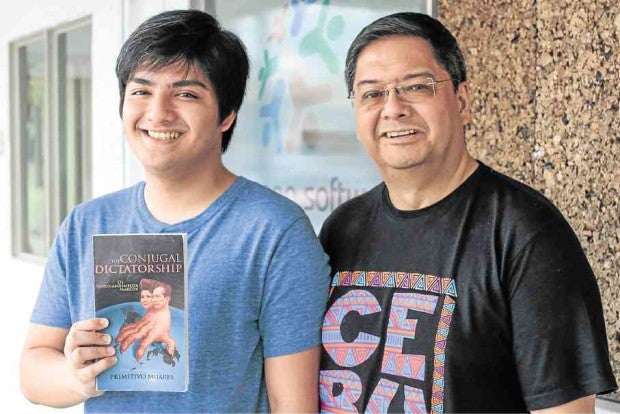 Like most millennials, he learned about the growing curiosity for the book, “The Conjugal Dictatorship of Ferdinand and Imelda Marcos,” on social media.

But what really stirred his excitement was reading on Reddit that the book was among the recommended readings on martial law, said Joseph Christopher “JC” Mijares-Gurango.

“Oh, that’s my lolo’s (book),” said the graduate of Reedley International School, of Primitivo Mijares’ insider account of the excesses and abuses of martial law.

To JC’s surprise, after the social media post came out, about a hundred people asked if they could get a copy. Fortunately, his grandmother, retired regional trial court judge Priscilla Mijares, had a big stack of the title on hand.

It was inspiring, JC said of the  response, which showed that “there was still a lot of interest (about martial law) and that people want to read the book” that Mijares first published in 1976.

Things sort of leveled up soon after the May 2016 elections when former Sen. Ferdinand “Bongbong” Marcos Jr., the son and namesake of the dictator, ran and almost won as vice president.

“That was really the trigger. We were talking about the book even before the election, but it wasn’t very serious,” said JC’s father, Joey Gurango.

“We had friends overseas who had no clue about the real Marcos legacy. They asked for copies of the book. That sort of started it. And when Bongbong almost won, we thought it was time to do something,” Gurango said.

“Millennials do not know everything but they know that there was something wrong. The objective was to arm them with information for them to really understand,” added Gurango’s friend, Kevin Ansel Dy, the publicist for the book’s relaunch.

Everything then started moving fast. By August, Gurango and his friends were already plotting their timetables to make room for the book’s relaunch. The group also linked up with the Ateneo de Manila University.

At the forefront of the relaunch was JC, whose interest about his grandfather’s legacy sparked even more interest among millenials like him.

At rallies opposing the burial of the late dictator at Libingan ng mga Bayani, JC easily won the hearts of fellow ralliers. “He looks better than Sandro Marcos, and that was really fun,” Dy said, referring to Bongbong’s eldest son and the dictator’s grandson.

The book’s relaunch will be on Tuesday, Feb. 21, from 4 to 7 p.m. at the Yuchengco Auditorium, Bantayog ng Mga Bayani, Bantayog Road, Diliman, Quezon City.