No curses, ramblings in Duterte speech at PMA alumni homecoming 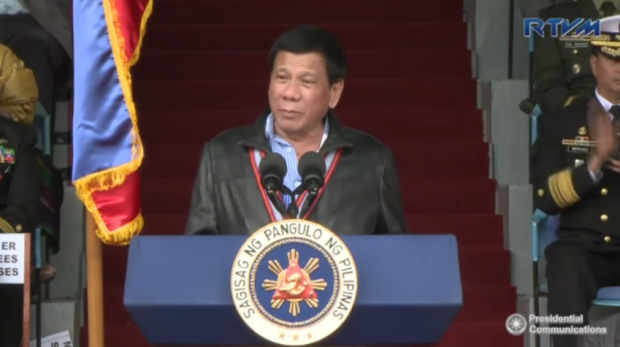 It was an unusual turnaround on Saturday when he delivered his nine-minute speech at Fort del Pilar before some 6,000 PMA alumni and their families.

The President, an adopted member of PMA “Dimasupil” Class of 1967 since 1994, called on members of police and military present “to continuously contain the ISIS threat and to intensify operations using all available assets and resources.”

“This is the only way to secure Mindanao,” he said.

He noted that the Sulu-based group of the Abu Sayyaf focuses on kidnap-for-ransom activities while the Basilan-based group focuses on assimilating the ISIS.

The President cited illegal drugs as among the threats that the nation faces, aside from terrorism.

“Little did I know that the drug problem was more complex until tens of thousands of drug users started turning themselves in as I directed the PNP (Philippine National Police) with the support of the AFP (Armed Forces of the Philippines) to conduct a war against illegal drugs and it was by large and successful,” he said.

It is now the Philippine Drug Enforcement Agency (PDEA) that takes the lead role on war on drugs after the PNP is on the process of cleansing its ranks. The AFP has been tapped to support the PDEA

Duterte was the first commander-in-chief to become a guest of honor at the PMA alumni homecoming after over a decade. Former President Gloria Macapagal-Arroyo was the last President to attend the same event in 2004.

He was also formally adopted by the PMA Alumni Association, Inc. (PMAAAI) as an honorary member, where they also expressed support “for his initiatives and advocacies most particularly on heinous crimes, and terrorism and his efforts and lasting peace.”

The President said it was a “double honor” to be adopted by the PMAAAI, adding that he appreciates the academy for its “template of discipline and civility.”

“I ask that you continue this tradition and thank you for inviting me to be part of you,” he added. IDL