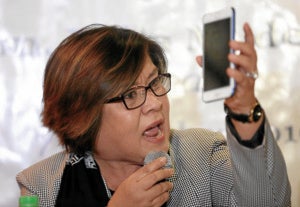 The Department of Justice (DOJ) filed on Friday three cases against Sen. Leila de Lima and others for violation of the Comprehensive Dangerous Drugs Act.

The three complaints were filed at 2:15 p.m. at the Office the Clerk of Court of the Muntinlupa City Regional Trial Court.

Also accused in the first complaint were Ronnie Dayan, the senator’s former driver-bodyguard, and Rafael Ragos, former director of the Bureau of Corrections and deputy director of intelligence of the National Bureau of Investigation (NBI).

In the third complaint, the co-accused were De Lima’s former security aides Dayan, Dera, and Joenel Sanchez; Bucayu and his staff and alleged bagman Col. Wilfredo Elli, and Jaybee Sebastian, a high-profile inmate at the New Bilibid Prison (NBP).

All were charged with violation of Section 5, in relation to Section 3(jj), Section 26(b) and Section 28 of Republic Act No. 9165, for the alleged proliferation of illegal drugs at the NBP during De Lima’s term as justice secretary.

The cases will be raffled at 1 p.m. on Monday to determine the branch that will hear the cases.

Charges against other accused dropped

While the prosecution panel filed three drug-related complaints to a regular court, it filed a resolution referring another case to the Office of the Ombudsman, which it said would have rightful jurisdiction over it based on the testimony of confessed drug lord Kerwin Espinosa.

Under the resolution, drug charges were also dismissed against former Justice Undersecretary Francisco Baraan, an official who worked under De Lima, for lack of evidence.

These people “will be utilized as prosecution witnesses,” the resolution explained.

“This is not just about politicking,” Aguirre said. “If this was just about politics, then why didn’t we include Baraan, who was an undersecretary (under De Lima). But the evidence against him was insufficient, so the five-man panel dismissed the case.”

Aguirre further justified the filing of the cases before a Muntinlupa RTC, even though De Lima is a public official, who should then be under the jurisdiction of the Sandiganbayan if put under criminal trial.

He said charges such as the “trade and sale of drugs… belong to the jurisdiction of the RTC.”

“It is but right and proper that it be filed before the RTC,” he said.

He added that the Ombudsman did not take the cases from them.

He added that the drug-related charges “are not cognizable by the Sandiganbayan.”

“And this is the reason why this is filed before RTCs,” he said. /atm /rga

Read Next
De Lima willing to be jailed, but says fight far from over
EDITORS' PICK
BuCor eyes building national prisons in all 17 PH regions
The Best Tech Gifts For The 2022 Holidays
House energy committee chair Arroyo bats for cheap electricity
No RITM layoffs amid push for new center
Abalos vows to fill jails with drug pushers
vivo’s coming to town to grant wishes with more holiday promos
MOST READ
LOOK: Vhong Navarro transferred to BJMP detention facility in Taguig
The Elephant Man in the Senate
Posh village as ‘shabu’ haven
LOOK: Zanjoe Marudo bonds with Ria Atayde, her family
Don't miss out on the latest news and information.