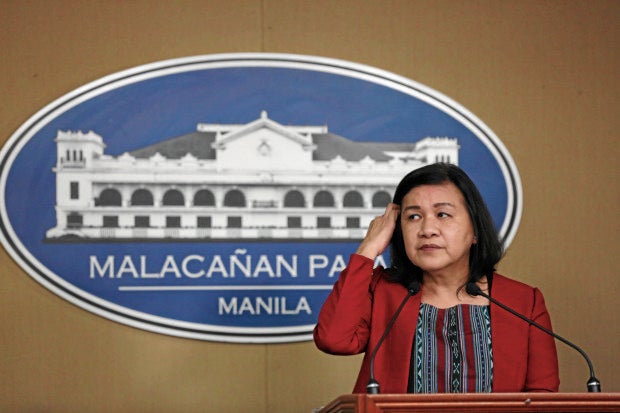 For former militant lawmaker Liza Maza, staying in President Duterte’s Cabinet as chair of the National Anti-Poverty Commission (NAPC) was a continuous battle against “militarist, neo-liberal and traditional” political personalities in the government.

Speaking at a press briefing in Malacañang for the first time, Maza reiterated that she was not about to quit her post even after the President terminated the government’s peace negotiations with the National Democratic Front of the Philippines (NDFP), the political arm of the Communist Party of the Philippines (CPP).

The NDFP had nominated Maza and two other fellow Left leaders, Agrarian Reform Secretary Rafael Mariano and Social Welfare Secretary Judy Taguiwalo, when the President offered public posts to the CPP as part of his efforts to end the communist insurgency in the country.

Maza, a former representative of Gabriela party-list group, also stressed that sealing a peace deal with the CPP was vital in Mr. Duterte’s antipoverty program.

“The talks have already started in relation to the Comprehensive Agreement on Social and Economic Reforms. And this agreement actually addresses the root causes of armed conflict,” she said.

Despite Mr. Duterte’s decision to tag the CPP and its armed unit, the New People’s Army, as terrorists, Maza said she was still optimistic that the Chief Executive would eventually have a change of heart.

The NAPC chair said she witnessed the successes of the peace talks when she personally attended the latest round of negotiations in Rome last month as adviser of the government’s peace panel.

“We are already at a very important stage of the negotiations… That’s why it’s difficult to just abandon it… It will be such a waste if you just throw the hard work of both panels,” Maza said.