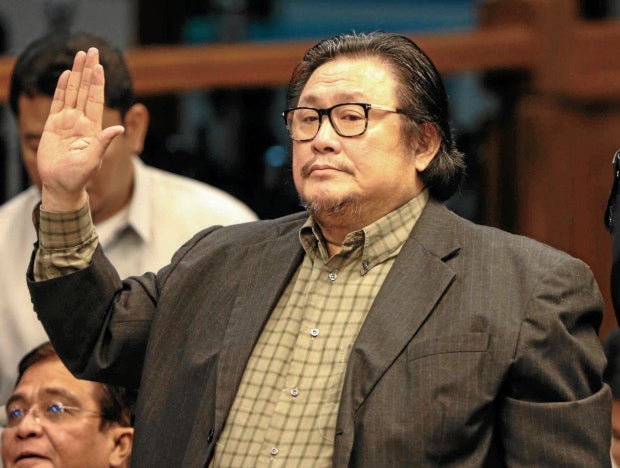 He is a multiawarded police officer, a writer and a self-styled gaming industry “expert” with only the best of intentions for the country.

Such was how retired Senior Supt. Wenceslao “Wally” Sombero presented himself at the Senate blue ribbon committee hearing on the bribery scandal surrounding the release of 1,300 Chinese nationals arrested at the Clark Freeport Zone in November, saying he stepped in to save them from dire detention conditions.

But for Sen. Leila de Lima, Sombero is “a fixer, an operator, a wheeler-dealer.”

Verbose and smug as he faced the Senate for the first time, Sombero said he had served as resource person in briefings of various government agencies on online gaming, saying he had waged a “lonely one-man crusade” to help develop the Philippines as a viable market for online gaming.

He said he had conducted studies showing how the Philippines could serve as a global online gaming industry leader, given the slump in North America and Europe due to “rigid online gaming laws” and market saturation.

“Believe it or not, I truly wanted to help President Duterte’s administration in as much as I was totally convinced that the Filipino people have finally elected a President who is sincerely committed to reform and have the political will to execute the necessary actions,” he said.

“I have been consistently and humbly offering my services to the national government in so far as crafting the implementing guidelines for the full regulation of the gaming industry,” he said.

His evasive responses at Thursday’s Senate hearing, however, drew the ire of several senators.

De Lima called him a “glib talker” and a “fixer.” Villanueva made an indirect reference to him as a “scumbag” for asserting that there was nothing illegal in the presence in the country of the Chinese workers.

Sen. Richard Gordon, the committee chair, several times reprimanded him for being a “smart aleck.”

After 27 years in the military and law enforcement, Sombero said he retired at age 44 “virtually at the height of my career” to pursue his passion for “investigative writing.”

He immersed himself in the “underground gambling industry” believing that it “was the most organized syndicated crime group” and eventually established a network here and overseas.

Sombero said he had published his investigative reports, served as resource speaker in congressional inquiries and appeared on several television and radio programs.

He, along with other partners and stakeholders, founded  Asian Gaming Service Provider Association Inc. or Agspa. He was eventually tapped to help the group of gaming magnate Jack Lam to secure the release of the arrested Chinese workers.

Sombero came into the picture through one Gigi Rodriguez of the North Cagayan Gaming at the Cagayan Economic Zone Authority, an agency that had issued the operating license for Next Games.

Next Games, a locator at Lam’s Fontana Leisure Parks and Casino, had sought the magnate’s help to take the arrested Chinese nationals out of detention.

Lam’s business partner, Charlie “Atong” Ang, said Rodriguez had recommended Sombero to help Next Games, and this was why the retired officer was called to broker the bail settlement.

Into the seventh hour of the hearing, as he was still being grilled about his role in the payoff, Sombero cut off Sen. Risa Hontiveros in the course of her questioning. “We are not given the chance to answer,” he complained.

Questions overlapped and answers were cut off, said Sombero, who was threatened with arrest for skipping earlier hearings.

“You are insulting this committee. You try to put form over substance. You come up with half-truths, hairsplitting answers. You better say your sorry properly,” an angry Gordon told Sombero, who apologized.