Gunmen taunted victim’s children and their nanny before fleeing on board two motorcycles
By: Leo Udtohan - Correspondent / @leoudtohanINQ
Philippine Daily Inquirer / 02:10 AM February 17, 2017 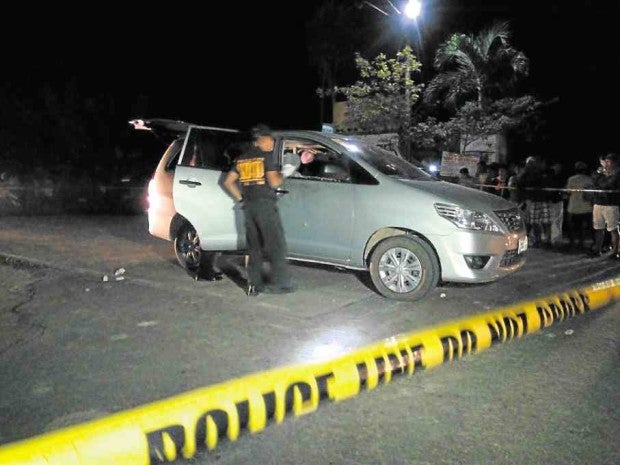 Policemen inspect the car of lawyer Mia Manuelita Mascariñas-Green, who died in an ambush staged by four men in Tagbilaran City on Wednesday. —LEO UDTOHAN

TAGBILARAN CITY—What would have been a routine drive home for lawyer Mia Manuelita Mascariñas-Green on Wednesday afternoon ended in a brutal murder witnessed by her three young children in this city in Bohol province.

The four gunmen did not just leave after shooting Mascariñas-Green, 49, who was driving her Toyota Innova. They also taunted  her 10-year-old daughter and 2-year-old twins and the children’s nanny, pointing their guns at them before fleeing on board two motorcycles, police said.

“They even bullied the kids and the yaya,” said Supt. Nicomedes Olaivar, Tagbilaran City police chief. “They made faces and then laughed at them,” he added.

Olaivar said the gunmen had companions positioned in the area.

He admitted, though, that while the police had established the identities of the suspects, investigators had yet to determine the motive of the killing, which he described as “well-planned.”

Olaivar said police were not discounting the possibility that the attack was related to Mascariñas-Green’s job as a lawyer.

“We all knew Attorney Mascariñas (Green), palaban unya (she fights) for the poor,” he said.

Mascariñas-Green was known as an environmental lawyer and was part of the Environmental Legal Assistance Center. She also handled civil and criminal cases.

Olaivar said the suspects were familiar with the lawyer’s daily routine.

Mascariñas-Green left her law office in Dampas District with her children and nanny at 4:27 p.m. on Wednesday.

“It was the usual route she was taking when going home (to Loon town) to escape traffic jams in  the city,” Olaivar said.

When her Toyota Innova reached the corner of H. Zamora and J.A. Clarin Streets in Dao District, two motorcycles blocked her path and fired at her.

Her children were unharmed as they were seated at the back passenger seat.

Mascariñas-Green’s husband, Stuart, a British, was in Bangkok for a conference and was expected to arrive in Bohol on Thursday. The family had yet to issue an official statement.

“She had excellent leadership skills and was articulate. She fought for the rights of students,” said Rosalinda Paredes,  former director for student affairs at DWCT.