Confirmation hearing at Commission on Appointments
03:03 AM February 16, 2017 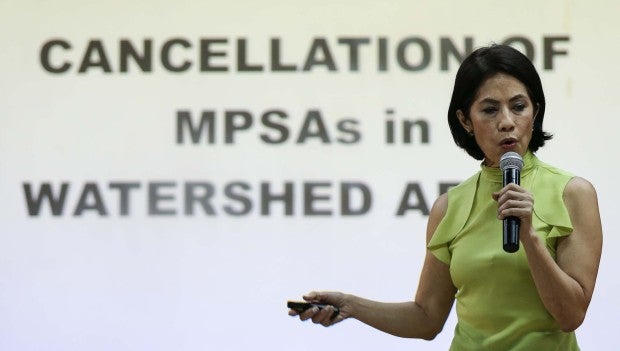 DENR Sec. Gina Lopez with a copy of the DENR Mine Audit Report during a press briefing on Mineral Production Sharing Agreement. INQUIRER PHOTO/LYN RILLON

(Editor’s Note: The following is the full text of the statement filed by the Chamber of Mines of the Philippines in the Commission on Appointments on Monday opposing the confirmation of the appointment of Regina Lopez as secretary of environment and natural resources.)

The Chamber of Mines of the Philippines has come to the conclusion that it will not ever come to a productive and rational dialogue with Department of Environment and Natural Resources (DENR) Secretary-Designate Regina Paz Lopez.

In the 42 years of the Chamber of Mines, it has always committed to maintaining an active working relationship with the government. We have always worked with the DENR secretary appointed by every President even as we have issues and disagreements. We have always threshed them out with the secretary in a cordial, professional and fair manner, and based on the rule of law.

We respected the decision of President Rodrigo Duterte and did not voice any opposition to the appointment of Lopez. We expected that she would heed the directives of the President to be fair and to follow the rule of law.

It is with regret and sadness that we have filed our opposition to the confirmation of Regina Paz Lopez as DENR secretary. This is the first and only time that the Chamber of Mines of the Philippines has had to resort to this action.

We beg President Duterte, the Commission on Appointments, and the Filipino people to understand our position and action opposing Regina Paz Lopez’s confirmation.