US warns of growing piracy risk off West Africa 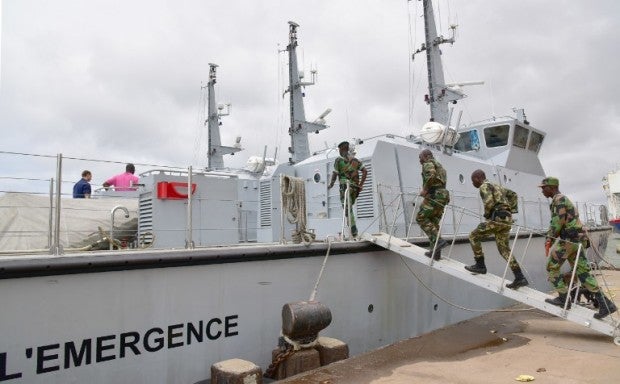 Ivorian soldiers board l’Emergence, one of the three vessels which will take part in anti-piracy operations on Aug. 25, 2016 in Abidjan. AFP

ABIDJAN, Ivory Coast — The United States is increasingly worried about pirate attacks off West Africa and is committed to helping countries bolster security in the region, a US diplomat said Tuesday.

At least 27 attacks on boats, including robberies, kidnappings or failed attempts, have occurred off the West Africa coast since April, according to the International Maritime Organization (IMO).

Off Africa’s east coast however — a former hotbed of pirate activity notably based in Somalia — only two attacks have been reported in the period.

He was speaking at the opening of a US-organized conference on sea security attended by officials from 15 African countries that runs through Friday.

Countries along the Gulf of Guinea stretching from Senegal to Angola have been trying to cooperate on improving maritime security, but they have limited resources for pursuing pirates.

“So we need legal frameworks in our own countries and with our neighbors… in order to bring criminals to justice,” Haviland said.

More than 40 African countries pledged to step up the fight against piracy at a summit meeting in Lome, Togo, in October.

The United States will support these efforts through its Africa Centre for Strategic Studies, financed by the US Defense Department.

World piracy has been on the decline since 2012 after international naval patrols were launched off East Africa in response to a spate of violent assaults by Somali-based pirates and others.

The number of pirate attacks off Nigeria rose from 14 in 2015 to 36 last year, the International Maritime Bureau said last month. CBB

Read Next
28 suspects nabbed in 3 drug dens dismantled in Cavite
EDITORS' PICK
Viral phone HONOR X9a 5G launched at P16,990
Philippines to offer VAT refund to foreign tourists by 2024
Things you can do with vivo Y02s’ upgraded 3GB+64GB storage
Novak Djokovic crushes Tsitsipas to win 10th Australian Open
House energy committee chair Arroyo bats for cheap electricity
Labor groups slam planned importation of 450,000 MT sugar
MOST READ
Jaja Santiago acquiring Japanese citizenship, out for Philippine team–De Brito
Paolo Contis on real score with Yen Santos: What you see is what you get
Peter Rosalita gets standing ovation from America’s Got Talent judges, crowd: ‘No hiccups’
A crown and sash, a necklace and a kulambo
Don't miss out on the latest news and information.