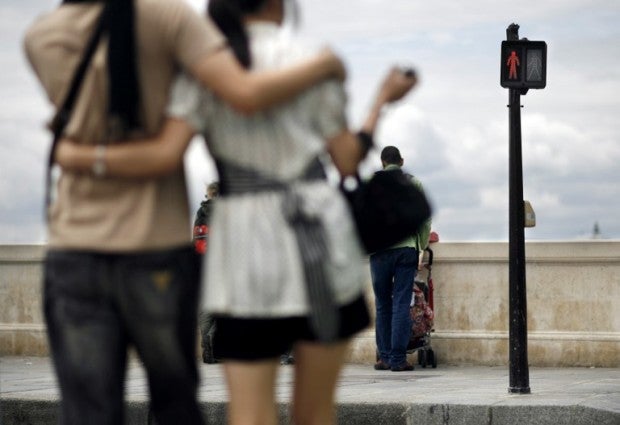 This file photo taken on July 11, 2007, shows a couple waiting at a red traffic light in Paris. Culture largely determines how we cross a street, figures in a study published on Feb. 15, 2017 show: Many French do not hesitate to cross a street although the traffic light is red, whereas the Japanese are very unlikely to cross a red light, especially in the presence of other pedestrians. AFP

PARIS, France — French pedestrians have the reputation of being a law unto themselves — but an unusual study has provided some scientific backing for the stereotype.

Four times out of 10, French pedestrians cross the road when the lights are against them, according to a paper published on Wednesday.

In disciplined Japan, though, the rate is 20 times lower.

Cedric Sueur of Strasbourg University in eastern France led a team that analyzed behavior at three pedestrian crossings in Strasbourg and four in the Japanese city of Nagoya.

The researchers recorded 3,814 crossings in Strasbourg and 1,631 in Nagoya.

READ: Student in ICU after car plows into pedestrians; injured now at 18

The rulebreaking was vastly different between the two countries — in France, 41.9 percent of crossings took place against a red light, but this was just 2.1 percent in Japan.

Men and young people aged 20-30 were more inclined than women and older people to cross illegally.

Different degrees of social conformity explain the gap in behavior between the two countries, researchers reported in the journal Royal Society Open Science.

“The French have less respect for the rules… We are less concerned with social approval,” Sueur told AFP.

“It’s not that the fear of a ticket is bigger in Japan than in France. It’s that people (in Japan) are more concerned about the opinion of others.”

The role of group behavior on pedestrian traffic is a major factor in safety, the study found.

According to the World Health Organization (WHO), nearly 300,000 pedestrians lose their lives on the road every year. CBB