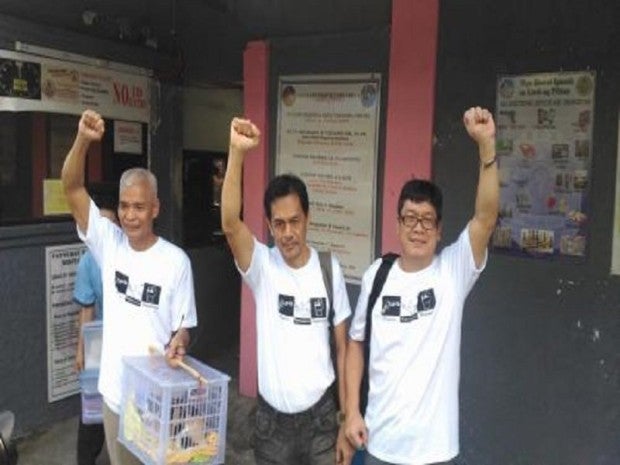 MANILA — The government peace panel has asked the Taguig court to cancel the bail of consultants to the communist rebel negotiator, National Democratic Front of the Philippines, in view of the “termination” of peace negotiations with the Philippine government.

In separate motions filed through the Office of the Solicitor General, the government sought the automatic cancellation of bail and issuance of recommitment order to Tirso Alcantara, Alan Jasminez, Ernesto Lorenzo and Reynante Gamara.

“Considering that the peace negotiations in Oslo, Norway, are terminated, the accused who were granted conditional release should be recommitted to the courts and their respective bonds should be automatically canceled,” the OSG motion filed on Feb. 13 said.

Lawyer Carlos Montemayor Jr., counsel for the accused, said on Tuesday, they filed a manifestation to defer resolution of the OSG motion since there were still efforts to revive the talks between the Philippine government and the NDFP.

“It should be stressed at the outset that while President Duterte verbally announced that he is terminating the peace negotiations, the said announcement was not accompanied by any formal written notice of termination as required in any formal negotiations between two parties. Hence, such verbal pronouncement may not be considered as being effective immediately,” the manifestation partly read.

Alcantara, who was among 21 NDFP consultants provisionally released to participate in the peace talks, did not appear at the scheduled arraignment on Tuesday at the Taguig Regional Trial Court Branch 266 for several murder, kidnapping, arson and rebellion charges.

His co-accused and fellow peace consultant Alan Jasminez earlier asked the court to defer the arraignment due to a medical condition.

Montemayor said Judge Maryann Corpus-Mañalac reset the arraignment on Feb. 21 and gave the OSG five days to file a reply.

Militant groups have called for the resumption of the negotiations aimed at resolving the five-decade insurgency and for the dismissal of the “trumped-up” charges against the NDF consultants and other political prisoners.  SFM