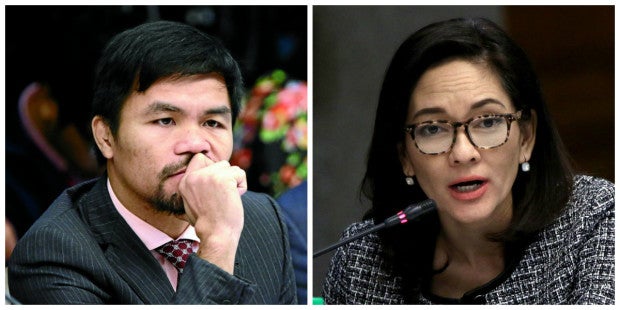 Senators Risa Hontiveros and Manny Pacquiao traded Biblical lines as they debated on Monday night her bill that seeks to stop and penalize discrimination on the basis of gender identity, including a person’s nonconforming clothing choices such as cross-dressing.

Hontiveros was defending on the floor Senate Bill No. 1271 or the Anti-Discrimination Act, when Pacquiao questioned whether the bill provided protection so that cross-dressing would not be used to commit crimes.

Pacquiao, who is known to be religious and conservative, noted that in the Bible, “there are only two types of persons—a man and a woman.”

“Yes, the Bible did narrate how man and woman were created and this is reflective on the bill … but I don’t remember the Bible directly ordering the type of dressing for men only as well as for women only,” Hontiveros said.

She pointed out that the Bible has many entries on being open to neighbors, regardless of their nature, which can be applied in considering the measure.

She then quoted a Bible verse from the book of James: “There is only one lawgiver and judge, the one who is able to save and destroy but who are you to judge your neighbor.”

Hontiveros said that if a person expressed himself through his dressing, “then why should one destroy his person?”

She said the country needed a law that would protect against discrimination, especially in the LGBT community.

But Pacquiao said the Bible also stated that “we can do everything but not everything is beneficial, especially doing wrong or sinning against God.”

He said his concern was that women’s clothes can be used by men to commit crimes such as fraud.

Hontiveros said there were existing laws that can punish fraud, but what they were debating about on the bill was “simple expression of gender identity.”

She also quoted Galatians 5:14, which said, “Love your neighbor as yourself,” and this should include those neighbors who have different sexual orientation or gender identity.

Pacquiao said he had raised the question because of the case of transgender Jennifer Laude who was killed in 2014 by US Marine Lance Cpl.  Joseph Pemberton because he found out Laude was a man and not a woman like he had thought.

Hontiveros argued that Pemberton was convicted of homicide and Laude was just expressing herself based on her sexual orientation and gender identity.

“She was just being true to her person and the one at fault was Pemberton as ruled by the court. He hurt and killed Laude. So let us not resort to victim-blaming,” Hontiveros said.

While he said he sympathized with the family of Laude, he said the court had downgraded the case against Pemberton from murder to homicide because Laude did not tell Pemberton he was a man.

“Jennifer also was at fault because he did not say he was a man,” Pacquiao said.

Sen. Leila de Lima later interjected, saying that the downgrade of the Pemberton case was not because of the element of deceit on the part of Laude but the absence of aggravating circumstances.