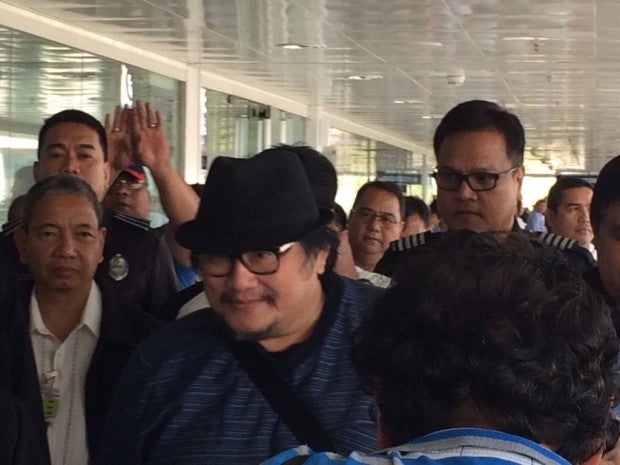 A retired police official, Wenceslao “Wally” Sombero, who returned to Manila from Canada on Tuesday, should brace himself for vigorous questioning by senators on Thursday, according to Sen. Richard Gordon, chair of the blue ribbon committee.

“He will be asked if [money was given to] high-level officials. There is a theory that he is saving the industry because there is big money in offshore gaming, the background of what happened,” Gordon told reporters.

Sombero, the alleged middleman of Chinese gambling magnate Jack Lam, has promised to disclose new details of the bribery/extortion scandal involving officials  of the Bureau of Immigration (BI), calling himself “the key” to shedding light on  the matter.

Sen. Manny Pacquiao said on Tuesday that Sombero had told him that he would make many revelations at the continuation of the Senate blue ribbon committee hearing on Thursday.

‘Many things to say’

“What he told me was that he has many things to say that people have not heard yet,” said Pacquiao, a longtime friend of Sombero’s who helped convince him to come home.

The amount was purportedly for the release of more than 1,300 Chinese nationals caught working illegally at Lam’s online gaming firm at Clark Freeport Zone in Pampanga.

The exchange on the early hours of Nov. 27 at a Parañaque City hotel was captured in security cameras. The two immigration officers, who have since resigned, maintained that they accepted the money as part of a case buildup.

Several senators believed they were lying.

Pacquiao said he met Sombero nine years ago, at which time he was still into gambling.

“[He knows details] that have not been said at the hearing and he said he knew a lot. He said he was the ‘key’ so that people would  get a clear picture,” said Pacquiao, who claimed he was in contact with Sombero the whole time his return to Manila was being arranged.

Sombero arrived on a Philippine Airlines flight from Vancouver around 9 a.m., Tuesday, and was fetched from the aircraft by immigration personnel from Ninoy Aquino International Airport Terminal 2 and several National Bureau of Investigation agents.

Shortly after his arrival, Sombero told reporters he would answer only questions that would not incriminate him at the Senate hearing. “There’s already a case in court,” he said.

He said he never intended to flee as he had informed Aguirre about his plan before he left the NBI protective custody on Jan. 17. “I didn’t need permission to leave. I just needed to inform him (Aguirre) that I was leaving.”

Aguirre said he did not give Sombero the green light to leave the country.

He pointed out that he did not sign an “allow departure order” for Sombero.

While he had ordered the BI to place Sombero on the immigration lookout bulletin order, immigration officers were responsible for implementing it and stopping illegal departures.

The BI officials were alerted of Sombero’s departure only two hours after he was cleared by an immigration officer.

His departure was the reason Sombero failed to attend the three Senate blue ribbon committee hearings on the Lam bribery scandal.