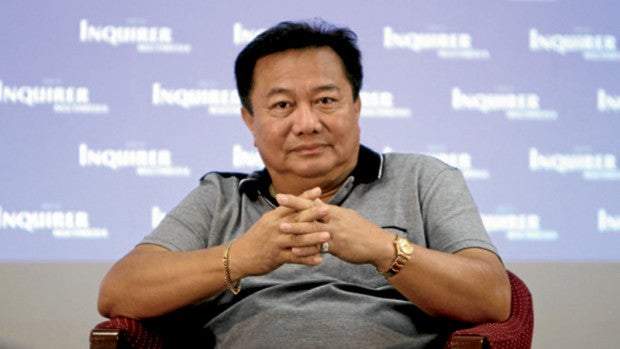 MANILA — House Speaker Pantaleon Alvarez III wants the organization of congressional spouses, which his wife heads, and the Presidential Legislative Liaison Office (PLLO) to move out of the Batasan Pambansa building by the end of the month, citing among his reasons the need for office space.

Alvarez on Tuesday said more deputy speakers and partylist congressmen have been needing offices, adding that even the House committees have cited the need for more rooms to properly carry out their functions.

Both the PLLO and the Congressional Spouses Foundation, Inc. (CSFI) are at the north wing of the Batasan building.

The CSFI is headed by Alvarez’s wife, Emelita.

Asked for his wife’s reaction, Alvarez said the CSFI “cannot do anything anymore if I tell them to move out because Congress needs [the space].”

“We are doing here a function of government. We cannot have it here and support it because I will be dispensing public money for a private purpose,” Alvarez said.

CSFI’s official newsletter last November listed a number of projects including an entrepreneurship program for inmates, a greening program for the different congressional districts, and allowing the districts to develop globally competitive products in time for the 50th anniversary of the Association of Southeast Asian Nations (ASEAN) hosted by the Philippines this year.

But more than just wanting the PLLO to vacate its office at Batasan, Alvarez said he actually thought the time has come to dissolve the office.

Alvarez said he wrote a letter to President Duterte in 2016, urging the chief executive to abolish the PLLO because of redundancy of
functions.

“This is part of streamlining the bureaucracy,” Alvarez told reporters.

The Speaker said he saw no need for the PLLO anymore because the Legislative Executive Development Advisory Council (LEDAC) has been meeting monthly under the Duterte administration.

“We directly present our priority bills at the LEDAC, discuss it with the Senate, and the executive also presents its priority legislative measures. At the meeting, we already know what they are so why would we need a liaison for that?” Alvarez explained.

The PLLO functions as the go-between of the executive and legislative branches, working as a sort of a first line of defense for the President.

Government officials who are familiar with PLLO work say that the office is most effective when it can mediate, on behalf of the Office of the President, with lawmakers on issues surrounding proposed legislative measures to ensure that the bills are passed and not vetoed by the President.

The PLLO also initially explains the budget of the Office of the President to the lawmakers, even before it is discussed at the committee level.  SFM