Sombero: I’m not Lam’s middleman and I don’t know him 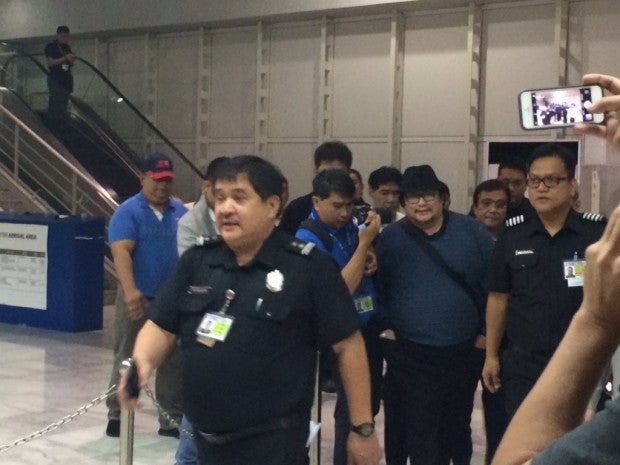 Wally Sombero is escorted by cops upon his arrival at the Ninoy Aquino International Airport. JEANNETTE ANDRADE/PHILIPPINE DAILY INQUIRER

At a press conference in his Quezon City home shortly after his arrival in the country, he said, “I want to set  the records (straight). If anybody can prove I’m a middleman or I know Jack Lam, I don’t even need a hearing, I’ll go straight to prison. To Muntinlupa (New Bilibid Prisons) right away. If anybody can prove that we know each other. That is for the record.  I do not know him.”

Sombero was addressing allegations that he acted as an emissary for Lam.

He pointed out that the reason he returned to the country is so the Senate investigation will not stop at the bribery/extortion charge involving immigration officials.

READ: Sombero to tell all in Senate probe on P50-M bribery scandal

“There is a much deeper reason for the inquiry,” Sombero said, adding that it was not as simple as determining who accepted or received a bribe, who extorted, or when and where it happened.

“The reason why there is an investigation is because of my heroic act of exposing corruption. That is the reason. This is why I am surprised by the media, the cruelty of the netizens,” Sombero stressed.

He explained, “The President said, ‘Tell on, scandalize and shout out against corrupt officials.’ I did so that’s why there is a Senate hearing. But what happened to me? So I am calling on the public not to be afraid. Continue to follow in my footsteps.  Because in the history of the Duterte administration, there will not be any other act of corruption bigger than this. Because people like me will no longer come forward, people who will willingly face danger.”

Describing himself as a whistle blower, Sombero urged the media to encourage others like him to surface.

He maintained that he was never involved in any wrongdoing nor was he charged during his career in the military and the police.

Sombero further said that he is the founder of a nongovernment organization, the Asian Gaming Service Provider Association (AGSPA), formed to educate the police and the government on putting a stop to illegal gambling through “revolutionizing gambling by cyber-tech solutions.”

He pointed out that he, BW Resources and Atong Ang were responsible for stopping jueteng through Bingo 2-ball.

Sombero maintained that he is involved in the service industry and that there is “no online gaming in the Philippines.”

“It is this service industry that will make the Philippines the hub of the world…Jack Lam is the face of the industry and is known to Chinese players,” he said.

Sombero added that his involvement was not with Lam but with the different companies, as founder of AGSPA, leasing facilities at the Fontana Leisure Resort and Casino in Clark, Pampanga.

“The reason I wanted to help was to capture the opportunity and the growth potential of the industry,” he explained, adding that the industry can generate $300 billion a year.

“I was not trying to help Jack Lam,” Sombero pointed out, stressing that while he does not know Lam personally, he knows the casino mogul’s spokesman.

As for the P50-million alleged bribe for immigration officials, Sombero said that he would rather address that in the Senate./rga