Dela Rosa tells cops: It’s okay to be ‘under the saya’ 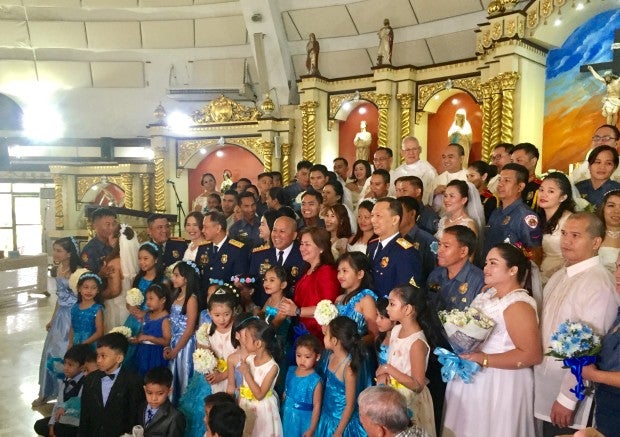 PNP chief Director General Ronald dela Rosa and other top police officials pose for picture with 21 policemen and their spouses who got married in a mass wedding in Camp Crame on Valentine’s Day, Tuesday. JULLIANE LOVE DE JESUS

Coinciding with Valentine’s Day, 21 couples exchanged “I do’s” at the St. Joseph Chapel inside the PNP headquarters in Camp Crame. The newlyweds were treated to a free reception by the PNP.

Dela Rosa, his wife Grace Nancy and other top PNP officials served as principal sponsors to the couples who were wed in rites officiated by Senior Supt. Eligio Mativio, director of the PNP Chaplain Service.

In a message, Dela Rosa gave the couples his “tried and tested” advice: For husbands not to be ashamed of being “under de saya” or being led around by their wives.

“If you’re a policeman, ang advice ko kailangang maging under the saya ka,” he said.

“Tried and tested ‘yan. Under the saya ka parati. It wouldn’t make you a lesser person, a lesser man if you subscribe to the wishes of your beloved wife,” Dela Rosa added.

At the same time, Dela Rosa told the wives not to be overly-possessive of their husbands.

“Treat your spouses like a bird, not so tight and not so loose. Kapag masyadong tight, hindi na siya makakalipad. Mamamatay ‘yan. Dapat tama lang,” he said.

In an ambush interview after the event, Dela Rosa noted the importance of PNP personnel legally sealing unions in a Church wedding.

The PNP chief said the moral and spiritual value of the sacrament of marriage remains a “very important aspect” in the lives of policemen and women.