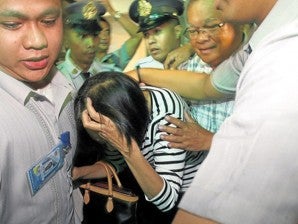 COVERING UP, NOT HIDING Former military comptroller Jacinto Ligot and his wife Erlinda appear at the Court of Appeals in Quezon City on Wednesday to post bail and avoid arrest. MARIANNE BERMUDEZ

Ex-military comptroller Jacinto Ligot and wife, Erlinda, finally surfaced on Wednesday, saying they were vacationing somewhere else, and were not eluding the authorities.

Purportedly coming straight from an “out of town trip,” the smiling Ligot couple posted bail for a string of tax-evasion cases at the Court of Tax Appeals (CTA), belying reports they had gone into hiding. The couple avoided the press.

It was the first working day after the holiday break, with the Ligots beating the sheriffs and avoiding detention.

The couple’s lawyers initially thought they had one case and one warrant, and expressed surprise that there were four cases and four warrants against them.  For all the cases that ran up to more than P400 million in liabilities, they posted a bail of P160,000.

“Of course it’s a natural feeling to have the fear of getting arrested, getting detained especially during the long weekend,” lawyer Emiliano Bantog told reporters. He squelched reports his clients had gone into hiding.

Bantog pointed out the Ligots attended a hearing on the tax evasion case at the Sandiganbayan on October 17, weeks after the CTA issued a resolution on the case on September 28.

The couple became aware of the arrest warrant from news reports, and jumped at the first chance they got to post bail, said Bantog, who claimed that the Ligots were neither served a warrant at their known address in Taguig City nor a copy of the court resolution.

“We learned about the warrant only last Friday. They didn’t know about it; they were out on vacation. When they immediately found out, they waited for the first day to post bail, this Wednesday, the first working day of the month. It’s here that we learned they had four cases,” he said.

Bantog said the Ligots went on vacation somewhere in Luzon, but declined to give details. He said the couple would show up at the arraignment of the four cases on November 16.

The Ligots did not issue any statement nor responded to questions before they were whisked away in their car.

Following reports they could not be found, Justice Secretary Leila de Lima had  ordered their arrest for alleged tax evasion.

On Wednesday, De Lima said she had asked the National Bureau of Investigation to determine if the Ligots went into hiding, for which they could be held liable. “I will await the report from the NBI before determining any such liability for evading arrest,” she said.

In a September 28 resolution, the CTA’s Second Division found probable cause for the Ligot couple to be put on trial for not reporting income earned in 2003 and for not paying tax on such income.

Ligot is the second high-ranking military officer to be charged with tax evasion after Carlos F. Garcia, another former military comptroller whose unexplained wealth prompted a wide-ranging Senate investigation into corruption in the Armed Forces.

The tax evasion case stemmed from the Senate inquiry into the involvement of past military chiefs and officials in the misuse of a military slush fund pooled from soldiers’ pay and intelligence funds, where Ligot was placed on the dock as a resource person.

The Bureau of Internal Revenue (BIR) in March filed a complaint against the Ligots in the Department of Justice for allegedly attempting to evade paying taxes from 2002 to 2004.

The BIR said the Ligots owed the government P428 million in unpaid taxes for that period, with Ligot having a tax deficiency of P290.2 million and Erlinda, P137.8 million.

The DOJ approved the filing of several counts of tax evasion against the couple last July.

The CTA’s Sept. 28 decision, however, focused only on the Ligots’ failure to file their income tax returns in 2003 and to report on other income they made during that year.

Based on the BIR’s investigation, the Ligots did not declare a total of P164.3 million that they gained in 2003, which makes them liable for P153.2 million in taxes, excluding interest and penalty.

The CTA said that after studying the charges and supporting documents, it found probable cause to issue an arrest warrant against the Ligots. Bail was set at P20,000 for each of the cases for the two of them.

While reporters were interviewing their lawyer at an adjacent building, the Ligots attempted to quietly leave the CTA main building, but did not escape notice.

They were mobbed by reporters at the lobby, but a phalanx of security men managed to keep reporters at bay. As they were led away into their car, Ligot, looking tanned, remained poker-faced, ignoring questions.

Mrs. Ligot, sporting a shorter hairdo, striped blouse, blue denim pants and pumps, made a great effort to hide her face from TV cameras and photographers. Escorted by a man in a barong shirt, she ducked so low her head almost touched the ground until she made it to their car.

Bantog said there was no need to place the Ligots on the hold departure order list, because their bail required them to inform the court of any plan to travel aboard, and get its consent.

“It’s up to the CTA,” he said. With reports from Marlon Ramos, Nancy C. Carvajal and Chona Yu, Radyo Inquirer