Newspaper apologizes for use Baldwin photo for Trump 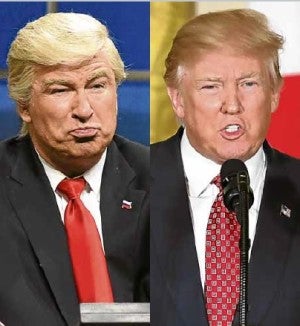 El Nacional published an apology on Saturday after mistakenly running a photo of the actor doing his impression of the US president on “Saturday Night Live” instead of Trump himself.

Accompanying an article in its Friday edition headlined in Spanish: “Trump says settlements in Israel don’t favor peace,” a photo of a scowling Baldwin in a blond wig appears next to a photo of Israeli Prime Minister Benjamin Netanyahu.

In a statement posted on its website, the Dominican newspaper said a photo of Baldwin imitating Trump—over the caption “Donald Trump, president of the USA”—was published on Page 19 and the mistake went unnoticed by the newspaper’s staff.

“El Nacional apologizes to its readers and anyone who felt affected by the publication” of the photo, the statement said.

Trump has lashed out at the way “Saturday Night Live” has lampooned him, saying Baldwin’s semi-regular portrayal of him “stinks.”

In tune with the new administration of alternative facts, TV viewers in America are embracing a comic alternative president.

Baldwin, who has scored in guest shots on “Saturday Night Live” with his mocking impersonation of Trump since the campaign’s final weeks, presided on Saturday night as guest host of the NBC comedy show, serving up yet another Trump masquerade.

In Baldwin’s spoof, Trump made good on a tweeted vow to “see you in court” directed at the three federal judges of the 9th US Circuit Court of Appeals, who last week refused to lift a stay preventing his immigration ban from being enforced.

His chosen venue: “The People’s Court,” where he was suing the three judges.

Then, as a character witness, he brought in Russian President Vladimir Putin (played by Beck Bennett), who praised Trump as “my little American Happy Meal.”