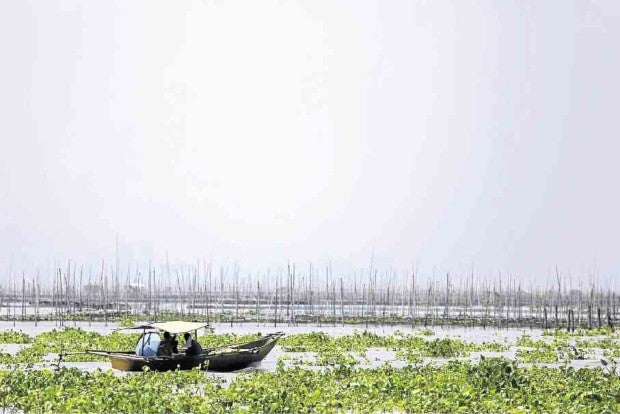 The demolition of fish pens and other structures in Laguna de Bay will give fishermen in Rizal, Laguna and Metro Manila access to their traditional fishing ground. —REM ZAMORA

Environment Undersecretary Arturo Valdez, who heads the National Anti-Environmental Crime Task Force, said the operation was launched after the agency received reports that armed men securing the fishery structures confronted and threatened fishermen in the lake.

The Department of Environment and Natural Resources (DENR) and the Laguna Lake Development Authority (LLDA) on Friday inspected at least 15 fish pens that covered a total lake surface of 2,000 hectares.

Accompanied by personnel of the Philippine National Police’s Maritime Group and the Philippine Coast Guard, Valdez’s team searched the lake’s “Sector A,” covering areas in Muntinlupa City in Metro Manila and this city in Laguna province.

“[Our] purpose … was to clear that area notorious  for armed groups,” Valdez told the Inquirer in a telephone interview.

“They would fire at small fishermen, as far as 30 meters away, once they come close to the fish pens,” he said.

Fish pen operators, who were given rights by the government to use the surface water to culture bangus (milkfish) and tilapia, usually hire at least 10 people to guard their structures.

These people are reportedly armed to protect fish stock against thieves who cut nets that secure the pens.

The government team, however, did not find any gun after several hours of inspection in the lake.

Valdez said the targets could have been tipped off and hid the guns, secured in plastic bags, in the water.

“But the message we want to send here is that the Maritime Group and the Coast Guard are out to protect our small fisherfolk,” Valdez said.

He said an uncle of LLDA general manager Jaime Medina was shot and killed by these armed men several years ago
in Cardona town in Rizal province.

Medina, a former mayor of Pateros in Metro Manila, came from a family of fisherfolk on Talim Island, Laguna de Bay’s biggest island in Rizal.

Valdez said Friday’s inspection was also in preparation for a massive demolition of illegal structures in the lake on Feb. 14.

Aside from government troops, members of at least five groups from civic and fisherfolk organizations will join the demolition.

President Duterte, in his State of the Nation Address last year, had said he wanted the area occupied by fish pens reduced to allow small fishermen access to their traditional fishing ground in the 90,000-hectare lake.

The DENR and the LLDA, in December last year, issued a temporary moratorium on Laguna de Bay aquaculture and asked fish pen operators to begin “self-demolition.”

In January, the government dismantled a 100-ha fish pen in Rizal.

“We have to keep the momentum [going],” Valdez said.