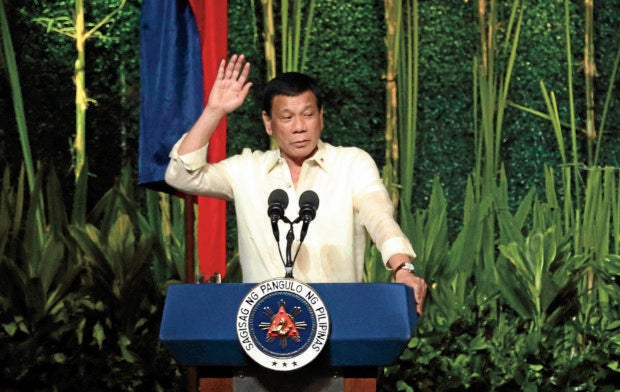 President Rodrigo Duterte defended on Friday his plan to restore death penalty in the country, saying it would be a deterrent against heinous crimes.

“When it (death penalty) was abolished, there was an increase of 3,000% (heinous crimes). And they say it’s not a deterrent?” Duterte said in Filipino during a speech in a business forum in Davao City.

The President read a news report in the middle of his speech, quoting Bureau of Corrections (BuCor) Director Benjamin De Los Santos as saying that heinous crimes rose to 3,180 percent after the death penalty was abolished in 2006.

“BuCor Director Benjamin delos Santos said there were 189 inmates convicted of heinous crimes before the capital punishment was abolished in 2006,” Duterte said reading while reading his briefer.

“After death penalty was revoked this figure rose to 6,200 inmates, an astonishing (3,180%) increase of persons convicted of heinous crimes,” he added.

The President slammed his critics who have been saying that nothing has happened when the death penalty was imposed in previous administrations.

“They said that even if the death penalty was there, nothing happened. It’s because I wasn’t the President then. Bring it back and I’ll turn those crazy into curtains. I’ll hang them,” he said in Filipino.

Both Houses of Congress had started deliberating on the proposal to reimpose the capital punishment.

Duterte has repeatedly said that he wanted to revive the death penalty to make sure that criminals pay for their sins.

He also earlier said that the death penalty was for retribution. RAM