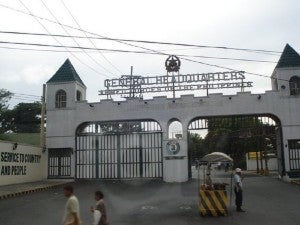 Prohibited items had indeed been found at the Military Police Battalion Custodial Detention Center in Camp Aguinaldo, the Armed Forces of the Philippines (AFP) confirmed on Friday.

The center is where high-profile drug convicts are detained.

In a news briefing, Marine Col. Edgard Arevalo, AFP public affairs chief, said it was the Bureau of Corrections (BuCor) personnel, who are in charge of the facility, who removed the the items, which included cellphones, television sets, and air-conditioning units from the cells and the common area.

He said AFP’s role in the matter was to inspect the premises and reporting their findings to the BuCor and the Department of Justice.

“The activities of removing the items and confiscating rest upon the BuCor and the DOJ,” Arevalo said. “The participation of the AFP here is undertaking our own inspection because the facility is inside an AFP camp and the concept here is that is we just lent it the BuCor.”

On Thursday, Gen. Eduardo Año, AFP chief of staff, confirmed the discovery of the prohibited items following a regular inspection done last December to ensure that facilities in the camp were safe from espionage and other security breaches.

“As part of our job, we made some observations and investigations and inspection and the appropriate measure or course of action will be through the proper authority like the BuCor and the DOJ and we believe they have made appropriate actions already,” Año said.

At least eight inmates, including convicted armed robber and drug dealer Herbert Colangco, were transferred to detention center last September to ensure their safety after some of them were attacked while the House of Representatives was conducting a hearing on drug activities at the New Bilibid Prison in Muntinlupa.

Last Wednesday, Sen. Leila de Lima, who has been implicated in the Bilibid drug trade, said the prohibited items were authorized by Justice Secretary Vitaliano Aguirre II in return for the inmates’ testimony against her before the House.

Aguirre denied this, adding he had ordered the BuCor to investigate.

In a statement, Arevalo said that, the military had also advised the strict observance of security protocols and the immediate installation of closed-circuit TV camera at the detention center.

He said it was the DOJ and the BuCor that control, administration, and management of the prisoners; who should be kept in the facility, when and how long; how they are to be transferred; the designation of the guards; and the approval of visits. /atm