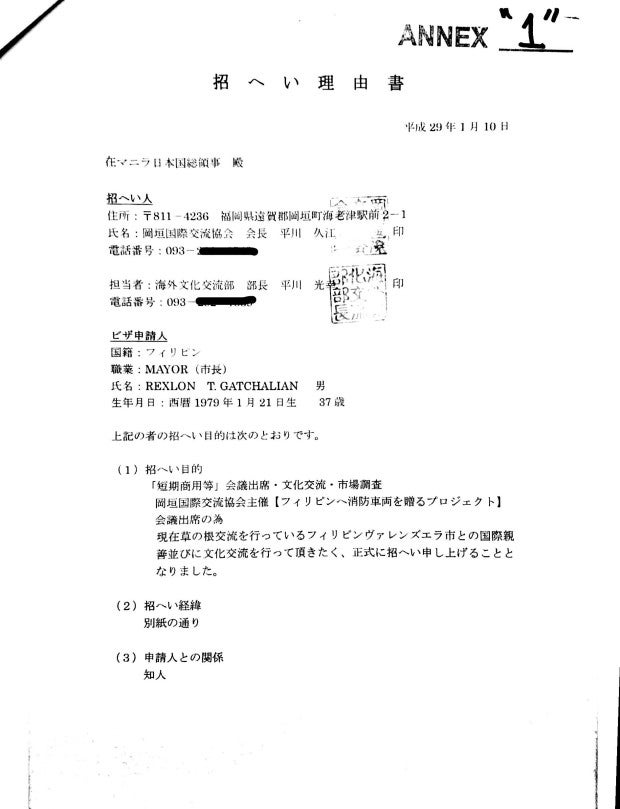 One of the itineraries attached by Valenzuela City Mayor Rexlon Gatchalian in his motion. Prosecutors bemoaned that it was written only in Japanese characters. (This photo was edited to redact what appeared to be telephone numbers with a Fukuoka dialing code.) PHOTO FROM VINCE F. NONATO/INQUIRER

In a three-page motion, Gatchalian’s camp told the court that “he has not shown, by word or by deed, that he is of such a flight risk.”

The motion stressed that the mayor “has consistently been respectful” of the court’s proceedings in the criminal case over the May 2015 Kentex slipper factory fire.

Citing a 2007 Supreme Court ruling in the case of former senator Jose “Jinggoy” Estrada, Gatchalian quoted that politicians “with a reputation and a respectable name to protect and preserve are very unlikely to jump bail.”

State prosecutors shortly after filed a two-page opposition because Gatchalian had not informed the court of details such as the place and contact number of his accommodations in Japan.

The opposition also noted that Gatchalian attached an itinerary that was “in Japanese characters and covers only up to March 3, 2017.”

Prosecutors also said he failed to show how his travel would be indispensable.

“Accused Gatchalian failed to show the necessity and urgency of the travel requested. It is not an official travel which requires his personal attendance,” the opposition read.

Although Gatchalian was already cleared of graft and reckless imprudence charges, he still had to ask for travel authority because prosecutors are currently appealing the court’s Dec. 13 resolution that found a lack of probable cause to try him.

Gatchalian was charged for the issuance of a business permit without requiring first a fire safety inspection certificate (FSIC) from Kentex management. The alleged negligence of city officials was blamed for leading to the fire that killed 74 persons working in sweatshop conditions.

But, the court threw the case out against the city officials, ruling that they were only complying with the city ordinance allowing the issuance of a business permit even without requiring the FSIC first. RAM