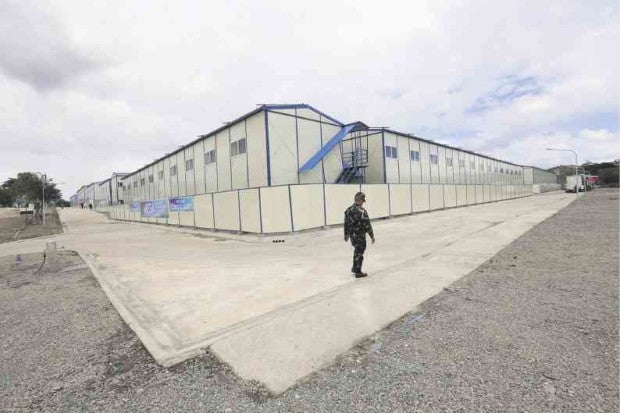 WAITING FOR DRUGGIES The Department of Health says some buildings in the Mega Drug Abuse Treatment and Rehabilitation Center, built inside Fort Magsaysay in Nueva Ecija province, can be turned into halfway homes and training centers as the facility awaits patients. —JOAN BONDOC

Health Secretary Paulyn Jean Rosell-Ubial said the Department of Health (DOH)-run center   had been treating only 127 people, most of them from the provinces of Bulacan and Nueva Ecija, since it  opened on Nov. 30 last year.

The number of drug users to be served by MDATRC could rise depending on referrals from local governments, she told reporters during the Central Luzon Dangerous Drug Abuse Summit held here on Wednesday. “This is a partnership,” she said.

Ubial, during the summit, said the record-setting surrender of 1.043 million drug users in the last seven months meant progress had been made in the Duterte administration’s  war on illegal drugs.

President Duterte, however, suspended all antidrug operations of the Philippine National Police after some policemen, who were supposedly on a mission to arrest a drug suspect, were implicated in the abduction and killing of Korean businessman Jee Ick-joo in Angeles City.

Ubial rallied support for Mr. Duterte’s war on drugs during the summit. She said, “We cannot  do this alone, it has to be all of us.”

Ubial described the more than a million drug abusers who surrendered to authorities as an “initial wave.”

“This is the first time in Philippine history … that there  are drug surrenderers. In the history of mankind, [drug users] are [arrested], subjected to court cases, jailed and forced into rehabilitation,” Ubial said.

A total of 129,217 drug users in Central Luzon surrendered to authorities from July 1, 2016, to Jan. 20, under the government’s intensified antidrug campaign.

MDATRC was built using a P1.4-billion donation of Chinese philanthropist Huang Rulun, chair of Century Golden Resources Group. It is set to receive a donation of sports equipment this month.

Ubial said several buildings in the MDATRC could be used as halfway homes or training centers.

There are a total of 48 rehabilitation centers in the country, mostly small and operated by private groups. Around 12,000 people with severe drug dependency are being treated in these centers, DOH records showed.

The DOH opened new centers in Leyte province and Caraga region  last year and is opening new facilities this year in Isabela province and Zamboanga City.

Ubial said 50 percent of the DOH’s P3.6-billion budget for drug treatment and rehabilitation was alloted for the upkeep, operations and construction of new centers.

The other half is intended for the training of volunteers in community-based programs.

Danilo Yang, president of the Prosecutors League of the Philippines, said his group was helping the DOH obtain court orders that would remand drug users to the custody of treatment and rehabilitation centers.

He said this was necessary so DOH personnel would not be accused of kidnapping or illegally detaining drug users in their treatment sites.

Yang said under this arrangement, executive judges would be asked to oversee the issuance of these court orders.

The league has been meeting judges and police officials to discuss how to resolve drug-related cases within a year after these are filed.

Yang, a Nueva Ecija prosecutor, said some cases were  delayed when policemen, who testified as witnesses during court hearings, failed to return  due to the lack of  money for fare or food.

Others were delayed by the absence of medico-legal officers or because only a few public attorneys were able to represent suspects, he added.

Ubial admitted that the DOH  was caught “flat-footed,  unprepared and surprised” by the extent  of the drug abuse problem. She said  the road ahead would be tough and “fraught with lapses.”

“We need to face the problem as a country, as a community because the  future of our youth is at stake,” she said, reporting  that the DOH received countless offers of help, among them from the World Health Organization and the United States government.

Ubial said the drug epidemic was “a health problem, not a police problem.”

“Abusers are mental health patients who need to [be] cured,” she said.

Ubial admitted her agency had a hard time filling up the MDATRC.