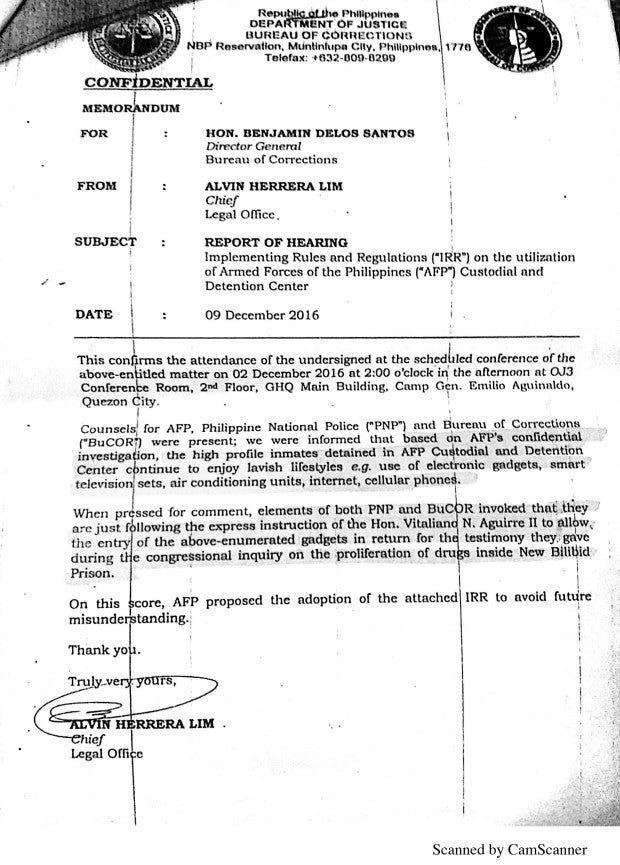 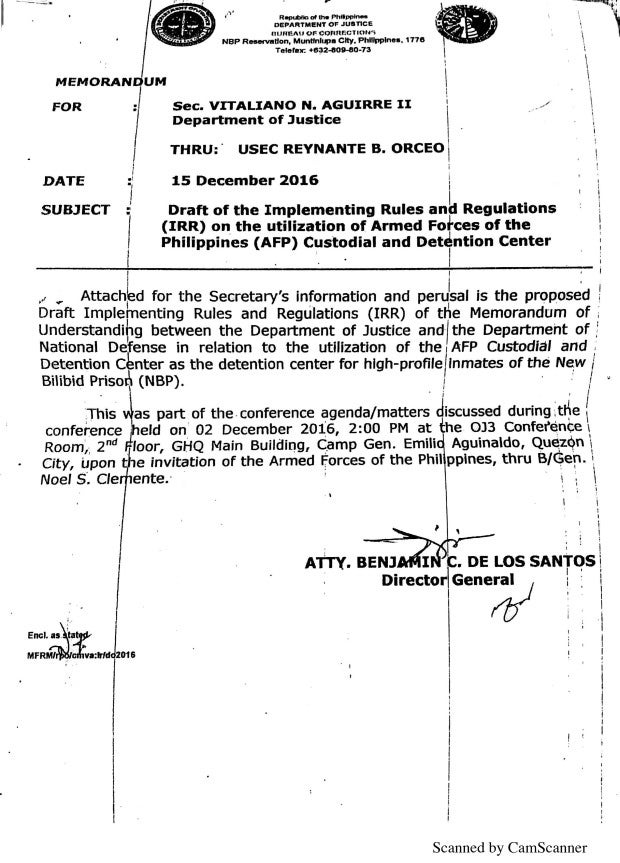 MANILA — Justice Secretary Vitaliano Aguirre II  denied on Thursday, that he granted special treatment for high-profile inmates who served as witnesses against Sen. Leila de Lima, and challenged the lawmaker to release proof.

Speaking to reporters at the Senate, Aguirre said he knew nothing about the alleged order to allow eight convicts, among those who had testified against De Lima at the House of Representatives drug inquiry, to gain access to gadgets and appliances while in jail in exchange for their testimony against the senator.

Aguirre is among administration officials chiefly accusing De Lima of drug involvement. On Thursday, he said state prosecutors investigating drug complaints against the senator would resolve whether to charge De Lima in court “any day” now.

“I don’t know anything about that memo. Why won’t she (De Lima) just release it? Why is she doing it in installments? She is scouring the bottom of the barrel,” said Aguirre.

“I don’t remember… I never consent[ed] or gave any go signal for anybody to give these special privileges … She is all sound and fury signifying nothing,” he said.

Aguirre was apparently referring to the document the Philippine Daily Inquirer obtained, showing how the military had found breaches in its jail guidelines as contraband were found in the jail cells of the eight inmates held at its Custodial and Detention Center in Camp Aguinaldo.

The Bureau of Corrections memo, a narration of what happened in an inter-agency meeting among the agency, the military and the police on Dec. 2, cited an Armed Forces of the Philippines (AFP) confidential investigation that found that “the high profile inmates detained in the AFP Custodial and Detention Center continue to enjoy lavish lifestyles e.g. use of electronic gadgets, smart television sets, airconditioning units, internet, cellular phones.”

It further found that “PNP (Philippine National Police) and BuCor invoked that they are just following the express instruction of the Hon. Vitaliano Aguirre II to allow the entry of the above-enumerated gadgets in return for the testimony they gave during the congressional inquiry on the proliferation of drugs inside New Bilibid Prison.”

But Aguirre insisted the Inquirer report was wrong. According to Aguirre, a justice secretary, while having supervisory powers over attached agencies such as the BuCor, does not have a direct hand in all their actions and decisions.

“Why would she (De Lima) accuse me?… [Y]ou could not expect the SOJ to look at every administrative matter affecting my agencies,” he said.

He said he readily instructed BuCor to check whether the inmates indeed had any access to special privileges, and to take them away if true.

“…[A]fter I read [about] her complaint, i immediately directed the BuCor Chief to conduct an investigation about this. These are detention cells sa AFP. So I said investigate, if true, stop. If they have to dismantle something, dismantle. We never tolerate any violation,” he said.

Told of Aguirre’s denial, De Lima said he should respond to what the contents of the documents.

“What he should respond to is the document… if that’s true that they had such a meeting and that that was how the meeting turned out,” she told reporters.

Aguirre faced De Lima at the Senate blue ribbon committee hearing on the bribery scandal involving Chinese gambling magnate Jack Lam, having a tense exchange over the justice chief’s claim that the businessman had also offered bribes to Andrea Domingo, chair of the Philippine Amusement and Gaming Corporation.

Domingo, during the hearing, denied saying this to Aguirre during a brief conversation sometime after Lam purportedy made a bribe offer to the latter.

“There is a denial, that she said no such thing that there was a similar offer to her from Jack Lam. So where did that come from?,” De Lima asked Aguirre.

The justice chief responded: “ I might have misunderstood the chairperson, but that was my notion after I talked to her.”

De Lima then rebuffed Aguirre, apparently speaking from her personal experience receiving the latter’s allegations: “It’s a serious allegation, whenever you say that someone committed a crime, someone attempted to bribe… So is that really your style?”

This got Aguirre riled up, saying he did not understand the point of De Lima’s questioning.

“It is a mere misunderstanding,” he said, raising his voice a bit.

At this point, the committee chair Sen. Richard Gordon intervened to call order, asking both to calm down.  SFM