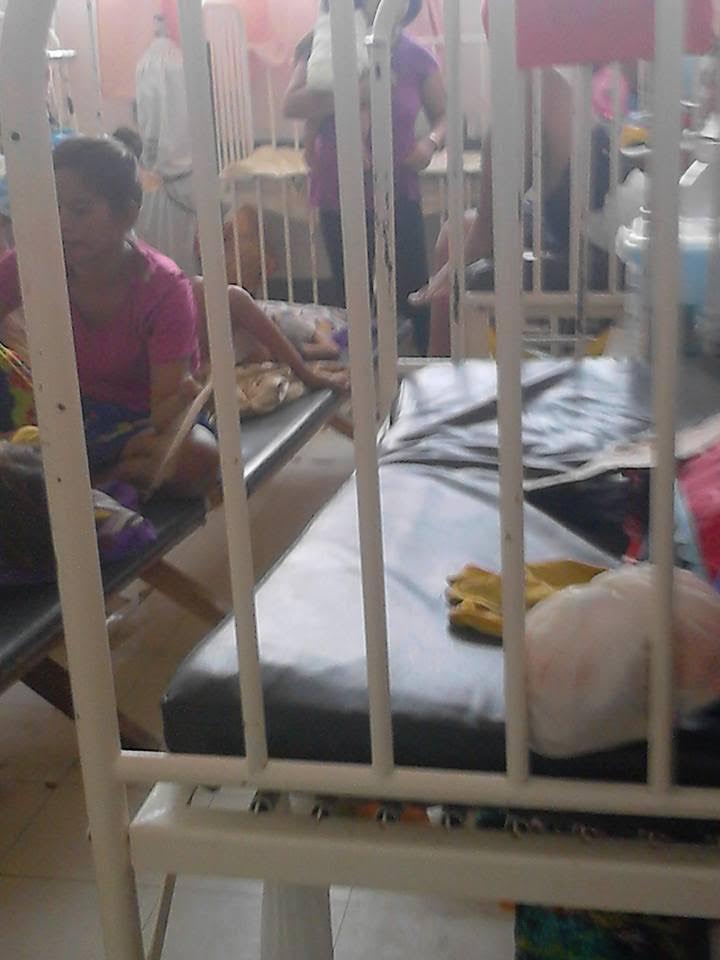 Badjao children in Dauis, Bohol, are rushed to the hospital for treatment of symptoms of amoebiasis on Feb. 9, 2017. (CONTRIBUTED PHOTO)

DAUIS, Bohol — At least 21 children from the Badjao community in Barangay (village) Totolan here were rushed to the hospital after showing symptoms of amoebiasis.

The Badjao children, aged one to 12, complained of stomach ache and were vomiting and suffering from loose bowel movement.

The cause might have been dirty drinking water or contaminated food.

Health authorities in Bohol have yet to issue a statement if indeed the children were afflicted with amoebiasis.

Amoebiasis is described as an infection of the gastrointestinal system.

According to the World Health Organization (W.H.O.), this disease is “transmitted via the faecal-oral route, either directly by person-to-person contact or indirectly by eating or drinking faecally contaminated food or water.”

Bartolo put liniment on John Rey, but his condition worsened, forcing the father to bring his son to the Gov. Gallares Memorial Hospital in Tagbilaran City.

One was rushed to the hospital on Feb. 2 while six others were rushed on Feb. 4.

The radio station dyTR reported that the number of victims confined at the Gov. Celestino Gallares Memorial Hospital reached 21 as of Thursday morning. Others were sent to a private hospital.

Tahakim said it started when the Badjao community lost its water supply three weeks ago.

“They drink tap water because not everyone here can afford to buy bottled water,” said Tahakim.

She said that residents bought water at P3 per container in Tagbilaran City.

But Tahakim clarified that some residents who brought water from the same source were not sick.

Tahakim said that the poor sanitation in the area, where trash and garbage were being dumped from stilt houses into the sea, could have been a factor for the outbreak.

“Children don’t wash their hands after playing,” he added.

On Wednesday, personnel from the Dauis Rural Health Unit went to the area to investigate the cause of the infection.

Dauis Mayor Marietta Sumaylo said financial assistance was given to the families of the sick children.

She also urged the residents living in the area to clean their surroundings.

“We told them to keep their environment clean to prevent infection,” said Sumaylo.

At least 200 Badjao families live in the coastal area of Dauis.  The Badjao community depends on fishing as their means of living.  SFM/rga