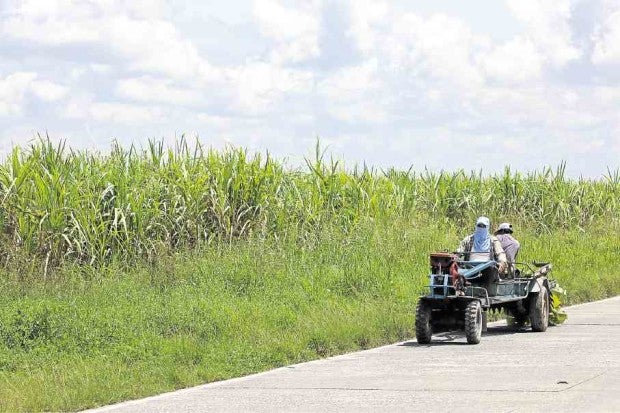 Rows of sugarcane line roads inside Hacienda Luisita, an estate owned by the family of former President Benigno Aquino III and now embroiled in the alleged trafficking of workers from Bukidnon province  Nevetheless, good news from DAR came in the form of an announcement that feuding farmers have agreed on a way to share land and harvest. —NIÑO JESUS ORBETA

MANILA — The Department of Agrarian Reform (DAR), in consultation with affected farmers, has come up with a solomonic decision in the distribution of lands at the Hacienda Luisita in Tarlac: Some 28 hectares of long-disputed farmlands in the hacienda will go to holders of certificates of land ownership award (CLOA) distributed through a controversial raffle (“tambiolo”) system during the previous administration.

This was the initial result of a dialogue the DAR central office in Quezon City mediated on Tuesday between Hacienda Luisita farmers from Barangay Mapalacsiao and Barangay Lourdes in Tarlac City.

The DAR website states that Hacienda Luisita is composed of 10 barangays in three municipalities in Tarlac:  Barangays Cut-Cut, Bantog, Balete, Asturias, Lourdes and Mapalacsiao in Tarlac City; Parang, Pando and Mabilog in the town of Concepcion; and Barangay Motrico in La Paz town.

In a press statement on Wednesday, the DAR said an agreement had been ironed out between long-time tillers of the local farmworkers’ organization Alyansa ng mga Manggagawang Bukid sa Asyenda Luisita (Ambala) and the CLOA holders who became agrarian reform beneficiaries through the much-assailed “tambiolo” system.  Ambala had agreed to “give way” to the CLOA holders, DAR said.

On Tuesday during the dialogue, Mariano had asked the farmer-beneficiaries, in Filipino: “Now, if DAR would decide to install these CLOA holders in those cultivation [“bungkalan”] areas, would that be acceptable to Ambala, those in Mapalacsiao?” This was met by applause from the Barangay Lourdes residents. Mariano had left the question unanswered by the Mapalacsiao residents as he rushed to attend a Cabinet meeting in Malacañang.

“The latter [CLOA holders] will now be installed to their respective landholdings where Ambala’s cultivation areas (“bungkalan”) stand,” the DAR statement read. The DAR said this was merely in accordance with a 2012 Supreme Court decision ordering the distribution of the vast sugar plantation owned by the Cojuangco clan, relatives of the previous president,Benigno Aquino III.

Some 28 hectares of land in Barangay Asturias will be awarded to 42 CLOA holders from Barangay Lourdes, with each receiving around 6,600 square meters, according to the DAR based on information from Provincial Agrarian Reform Program Officer Ileona Pangilinan. Farmers of Barangay Lourdes, on the other hand, agreed to let Ambala farmers harvest the crops that have been planted on the disputed lands as of now.

The DAR said the farmers reached this agreement after Agrarian Reform Secretary Rafael “Ka Paeng” Mariano appealed for a “united front” from the farmers.

“Let us remember who the real enemies are. Let us unite against landlord-oligarchs,” Mariano had said.

The DAR said the “farmer groups have been in dispute over the ownership of the parcels of land for years now.”  Due to the “tambiolo” scheme, around 3,000 square meters of farmlands long occupied and cultivated by Ambala farmers were distributed by the previous DAR administration to other farmer-beneficiaries, which led to the Ambala farmers’ displacement from Mapalacsiao, and to their being harassed allegedly by Cojuangco clan-linked personalities.

Ambala has long questioned the “tambiolo” system as an unfair land distribution scheme.

The installation of the CLOA holders shall be implemented not later than April 23, DAR Undersecretary for Field Operations and Hacienda Luisita Task Force char Marcos Risonar has announced.

“Considering that there is no more factual obstacle in the installation of the 42 CLOA holders within the former Hacienda Luisita land, the Provincial Agrarian Reform Office of the said province is hereby directed to install the 42 CLOA holders to their designated land allocations as stated in the existing subdivision plan,” Risonar said.