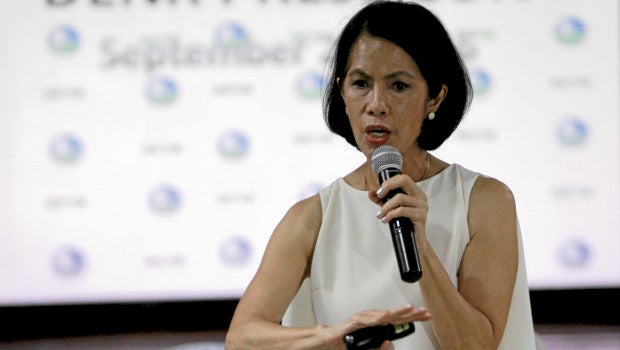 MANILA — As mining firms complained they were deprived of due process and were not informed beforehand of the mining audit results by the government, Environment Secretary Gina Lopez has admitted the closure and suspension orders were signed and released only on Wednesday (Feb. 8)—a week after she had held a press conference about it.

In a statement issued by the DENR on Wednesday, Lopez explained: “When the presscon (by the Department of Environment and Natural Resources last week) was done, the evaluations had been completed days before. What happened was an omnibus directive. It was prepared for all mining companies and our lawyers have decided it should be issued to individual mining companies. That’s why there’s been a delay.”

In a press conference on Feb. 2, Lopez announced the closure of 23 mines and the suspension of five—amounting to more than half of the 41 metallic mines audited. Lopez said she had ordered the mining operations closed because they were located in “functional watersheds.”

Lopez, on Wednesday, also said she would release to the mining industry the recommendations submitted to her by the mining audit technical committee.

Last week, Lopez declined to release copies of the Mines and Geosciences Bureau (MGB) recommendations to the media. “The MGB is recommendatory. But at the end of the day, I visited the mines myself. And I used my judgment on what is the best thing to do,” Lopez had said.

“If it [recommendations] is not resonant with the principles under which DENR runs, and my own observations, why would I give it to you, if I don’t agree with it?” Lopez had said.

Pressed by the media, Lopez had said: “I don’t want to show you the recommendations, whatever it may be. I don’t have to have you privy to the processes on which I made my decision. What I’m sharing with you are the principles to which I stand by.”

Lopez, in her latest statement, maintained the mining audit conducted by the DENR since July was “fair and within the law,” in keeping with the Mining Law and the Philippine Constitution.

But during last week’s press conference, Lopez had said: “We want to follow due process, but if you take too long, I’m not going to wait forever,” noting she had been “unhappy” with the MGB for what she perceived as the slow pace of the audit.

During the press conference last week, Lopez said that the order had already been issued two days prior, but “the closures become final when the President says so, since the companies can still appeal to the President.” She had also said then that if the President asked for a copy of the recommendations, she would submit it to him.

Lopez, in her latest statement, said she made decisions “based on truth, service, and the common good.”  SFM