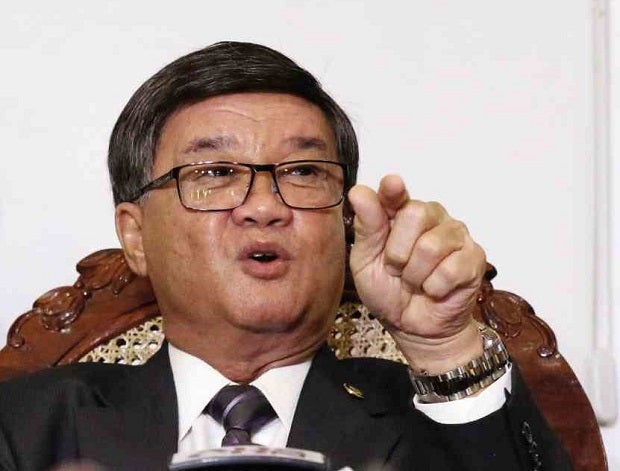 MANILA — A confidential Bureau of Corrections (BuCor) document spelled out how Justice Secretary Vitaliano Aguirre II apparently ordered the grant of special privileges to high-profile inmates held at the military’s custodial center in Camp Aguinaldo as a reward for testifying on alleged drug links of Sen. Leila de Lima.

The Dec. 9, 2016 memorandum obtained by the Philippine Daily Inquirer, signed by Bureau of Corrections (BuCor) Legal Office Chief Alvin Herrera Lim and addressed to BuCor Director General Benjamin Delos Santos, reported on a conference among counsels of the Armed Forces of the Philippines (AFP), the Philippine National Police and the bureau on Dec. 2.

Delos Santos forwarded the document and the IRR to Aguirre’s office on Dec. 16.

Lim, in his report, said the AFP sought to enforce implementing rules and regulations (IRR) on the custodial arrangement during the meeting due to apparent violations of military guidelines.

This after an AFP investigation found that the inmates, among those who had testified before the House of Representatives that De Lima had allegedly accepted drug money to fund her senatorial campaign, enjoyed luxurious living while in custody.

Eight high-profile convicts, originally jailed at the BuCor-run New Bilibid Prisons (NBP), were transferred to the AFP custodial facility in September 2016, just before they appeared at the House justice committee hearing and attested to giving De Lima millions out of their illegal drug profits.

The group of inmates include convicted robber Herbert Colanggo, who was earlier busted for keeping a luxury villa at the NBP, and convicted kidnapper Noel Martinez, a gang leader at the national penitentiary.

“When pressed for comment, elements of both the PNP and BuCor invoked that they are just following the express instruction of the Hon. Vitaliano Aguirre II to allow the entry of the above-enumerated gadgets in return for the testimony they gave during the congressional inquiry on the proliferation of drugs inside New Bilibid Prison,” read the document.

“On this score, the AFP proposed the adoption of the attached IRR to avoid future misunderstanding,” it said.

The IRR, which implements a memorandum of understanding between the DOJ and the DND on the custodial arrangement for the inmates, stipulated that both agencies should “jointly identify the location of possible confinement facilities and monitor the inmates to ensure that no contraband or other illegal or prohibited items shall enter the designated confinement facility(s).”

It said the inmates would not be allowed “devices which will allow them contact outside the facility.”

Under the IRR, the PNP-Special Action Force was tasked “to provide direct security over the inmates.”

The IRR also explicitly stated that the AFP custodial facility has always been “a no cellphone zone,” covering even the military, PNP and BuCor personnel themselves.

It further said that the PNP and BuCor personnel assigned at the facility to watch over the NBP inmates “shall be subjected to AFP camp rules and regulations at all times.”  SFM