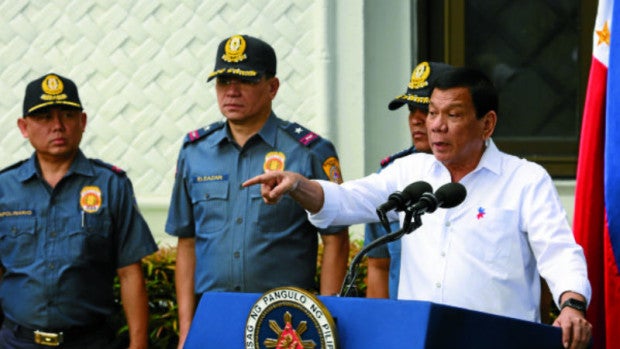 Sending nearly 300 cops to strife-torn areas in Mindanao was not meant to punish the erring officers, it’s just a regular procedure the Philippine National Police (PNP) has been observing for a long time.

As members of the PNP, spokesperson Senior Supt. Dionardo Carlos said policemen and women should always be ready to be transferred to any police station upon the orders of their commander.

“Bilang mga active policemen, a reminder again that it’s a regular thing among us—the transfer and reassignment of our personnel,” Carlos said in a press briefing on Wednesday.

This was in response to criticisms against President Rodrigo Duterte and PNP chief Director General Ronald “Bato” Dela Rosa’s impulsive decision of sending rogue cops to Basilan, Sulu and Tawi-Tawi.

READ: Duterte sends off ‘crook cops’ to Basilan with insults

Some government officials from Mindanao also opposed Duterte’s decision to dump bad cops there, saying Mindanaoans deserve the best men of the PNP.

Carlos also stressed that transfer to different units can be anywhere because the PNP is not similar to the law enforcement structure in the United States which has a separate federal, state, and local police and sheriff departments.

“We are members of the PNP and not just a local police force, unlike in the US na may sheriff, federal police. Tayo po ay maaring ma-reassign saan mang lugar sa ibang Pilipinas,” he said.

Duterte publicly berated the 228 errant cops when Dela Rosa brought them to Malacañang supposedly to clean the Pasig River as punishment.

There, Duterte gave them an option: To be sent to Mindanao to fight Abu Sayyaf terrorists or resign.