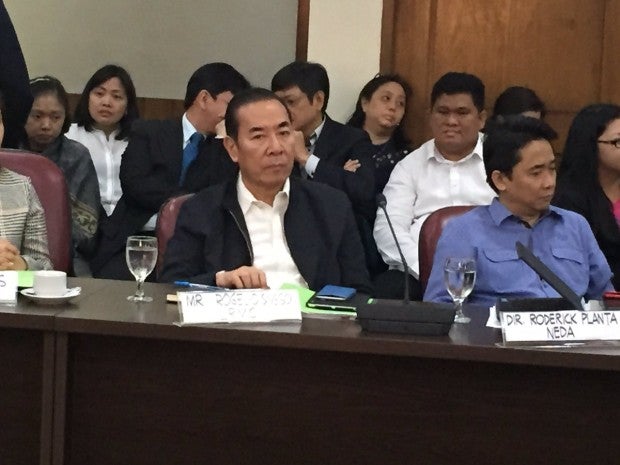 There’s another alternative for government to ease the commuter’s woes while the Metro Rail Transit (MRT-3) common station is underway.

Rogelio Singson, the Department of Public Works and Highways secretary during the administration of former President Benigno Aquino III, said the Light Rail Manila Corp. (LRMC) is willing to shoulder a temporary common station while the common station is not yet finished.

He made the offer during the House of Representative transportation committee hearing on Wednesday.

“We have made an offer to the Department of Transportation (DOTr). Because we studied it, and it seems that the construction of the common station will take long because of issues like the budget and a possible temporary restraining order,” Singson told reporters after the hearing.

“So we did study the possibility. We have made that offer to the DOTr, so it’s up to government to decide,” he added.

Singson said the LRMC, the Light Rail Transit-1 (LRT-1) operator of which he heads, now is willing to invest P250 million to P280 million for the temporary station at the original site of the common station in front of SM North Annex.

He said the construction may be finished with 10 months once government gives the go signal, and that the LRMC may recoup the investment by operating the temporary station for two and a half to three years.

Singson clarified that the LRMC would recoup the investment through increased ridership, not by increasing the fare.

“We will just need to operate that station for two-and-a-half to three years to recover the costs because of increased ridership. So it will not be passed on, because under the concession agreement, there’s already a provision for regular fare increases,” Singson said.

He said once the permanent common station is finished, the temporary station may be removed.

“Edi wala na, kung tapos na ‘yung station (It will no longer operation once the common station is built). That’s why as I said earlier, the temporary station is not in any way going to delay or affect the construction of the permanent common station,” Singson said.

“Of course, the better solution is the permanent station. But when is that going to happen? So it has to be decided by government what it wants to do,” he added.

The MRT common station will connect three urban transit lines: the LRT Line 1, the MRT-3, and the MRT-7, which recently broke ground and would run from the Common Station to Bulacan via Commonwealth Avenue.

The DOTr is expected to spend P2.8 billion in taxpayers’ money to build the portion that will house the platform and concourse of the LRT 1 and MRT 3.

Construction is set to start at the end of 2017 and completion is pegged at April 2019.

The legal tussle started when government in 2014 had wanted the common station to be built near Trinoma because it would be cheaper at P1.4 billion.

This prompted the SM Prime Holdings to seek an injunction from the Supreme Court to oppose the transfer for violating a 2009 memorandum of agreement with LRT-A that the common station should be constructed in front of the SM North Edsa.

After much legal scuffling, the stakeholders finally agreed to make the common station in between SM North Edsa and Trinoma.