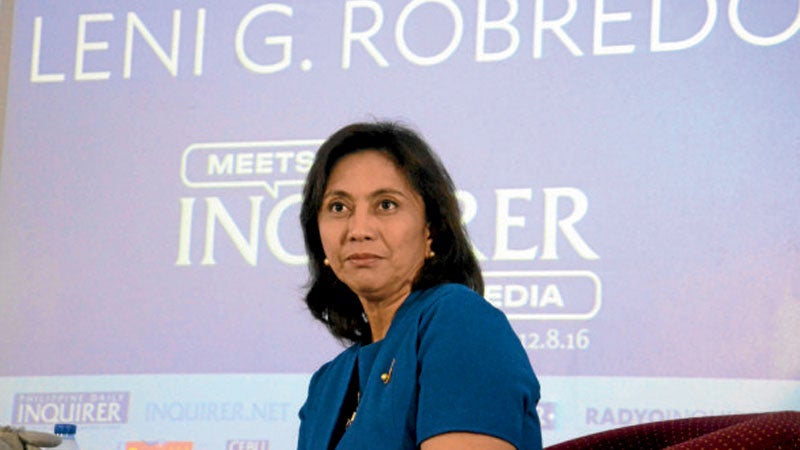 The Catholic bishops’ pastoral letter that chastised Filipinos for their “indifference” to President Duterte’s “reign of terror” could be the “tipping point” for the opposition to the government’s brutal war on drugs, Vice President Leni Robredo said on Tuesday.

Issued by the Catholic Bishops’ Conference of the Philippines (CBCP) and read in churches on Sunday, the letter could make relatives of the victims of the antinarcotics campaign realize that the Church was on their side and encourage them to speak out, Robredo told priests and seminarians during a forum organized by the Tahanan ng Mabuting Pastol in Imus, Cavite province.

Robredo, an opponent of Mr. Duterte’s war on drugs, said most Filipinos had chosen to be silent because they were gripped by fear.

But with more than 7,000 people killed in the antinarcotics drive, “[i]t seems wrong to be silent,” she said.

Robredo said the CBCP’s call for a stop to the “reign of terror” might help embolden Filipinos to break their silence and mount a vigorous opposition to Mr. Duterte’s war on drugs.

In her message to the priests, she said: “I found the Church’s pastoral letter this past weekend to be highly enlightening. It spoke to my heart; and the feelings I have long harbored found solace in the affirmation of the Church.”

“That the life of every person comes from God, and it is God alone who can take it back. Taking drugs and pushing drugs show disrespect for the gift of life, and endanger the lives of others. But we must not lose faith in the ability of any person who has lost his way to change,” Robredo said.

In their pastoral letter, the bishops said bloodshed was not the answer to the drug menace.

“An additional cause of concern is the reign of terror in many places of the poor. Many are killed not because of drugs. Those who kill them are not brought to account,” they said.

Albay Rep. Edcel Lagman, a leader of an opposition bloc in the House of Representatives, said he saw a parallel between the CBCP pastoral letter and Amnesty International’s report alleging that policemen were behind most of the killings of drug suspects.

“Both are serious indictments of President Duterte’s deadly war on drugs, which violates human rights, the rule of law, and the sanctity of life. The drug campaign spawns extrajudicial killings, which are not the solution to the drug menace and victimize almost invariably the poor,” Lagman said.

Caloocan Rep. Edgar Erice said criminal policemen extorting money from and killing innocent people were the natural creations of the war on drugs.