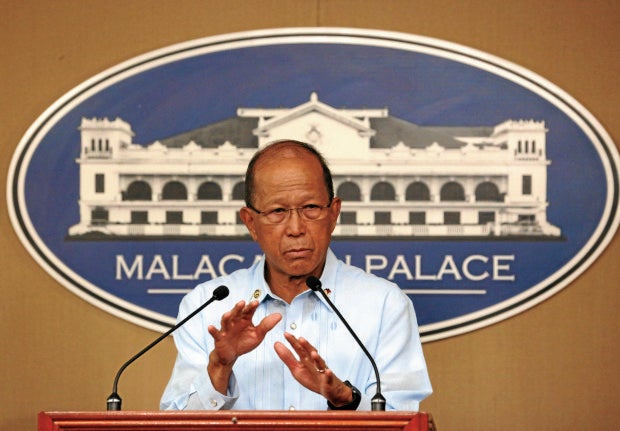 Defense Secretary Delfin Lorenzana answers questions during a press briefing held in Malacanang on ceasefire between the government and the CPP,NDF,NPA. INQUIRER PHOTO/JOAN BONDOC

President Duterte has allowed the construction of temporary military facilities as mutually agreed on by the United States and the Philippines under the Enhanced Defense Cooperation Agreement (Edca), Defense Secretary Delfin Lorenzana said on Tuesday.

Edca, whose constitutionality was upheld by the Supreme Court last year, further strengthened the military agreement between the two countries under the 1951 Mutual Defense Treaty.

In a press briefing in Malacañang, Lorenzana said the President was misinformed when he accused American soldiers of bringing in war armaments in Palawan, Pampanga and Cagayan de Oro City.

“I don’t know where the President got his information, but I corrected it. I talked to him to tell him that, ‘Mr. President, first, there was no construction yet of Edca camps,’” the defense secretary told reporters.

“‘It will be constructed sometime later this year or next year. Second, it’s not allowed in our agreement. There will be no stockpiling of weapons or anything that could be used for war games,’” he recalled telling the President.

Moreover, Lorenzana said the equipment that the US military would be bringing in were mostly intended for humanitarian assistance and disaster response such as rubber boats.

He said the equipment would be “strategically located around the country” to allow US forces to immediately provide assistance in case of disasters.

Added Lorenzana: “I actually asked (the President’s) decision if we would still continue with the Edca construction or not. He said, ‘OK. Let’s allow it, but be sure there will be no stockpiling of ammunition there.’”