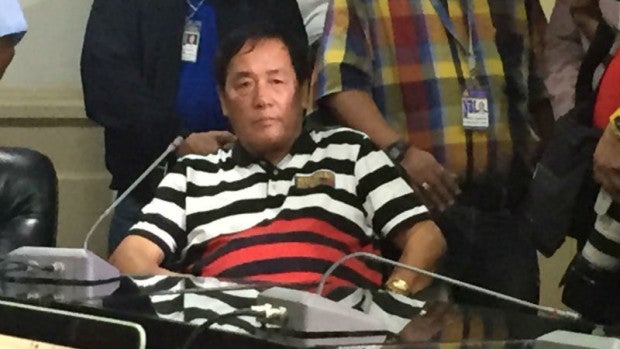 The Department of Justice (DOJ) is not yet ready to accept the request of the owner of a funeral parlor in Bagbaguin, Caloocan City, who was among those implicated in the killing of South Korean businessman Jee Ick-joo, to be included in the Witness Protection Program.

Justice Secretary Vitaliano Aguirre II said it is premature to accept the request of Gerardo Gregorio Santiago, owner of Gream Funeral Homes where the body of Jee was brought after he was killed in Camp Crame.

“We are not yet ready to offer him that. The joint investigation is yet to be completed,” Aguirre said.

Santiago went to Canada early this year but returned to the country a few weeks later after coordinating with members of the National Bureau of Investigation (NBI).

He denied participation in the killing of Jee. During last week’s preliminary investigation, Santiago, through his counsel said he does not know that Jee was a victim of kidnapping for ransom because he was told that the person was killed in an anti-drugs operation.

Santiago said he could have stayed and hide in Canada but he said he returned to clear his name.

Atty. Restituto Mendoza, counsel for Santiago said his client has already turned over to the NBI the cellular phone that he used when SPO3 Ricky Sta. Isabel called to bring a body that turned out to be that of Jee.

The cellular phone according to the NBI would be subjected to forensic analysis.

Footages taken by CCTV at the funeral parlor have also been turned over to the NBI. CDG