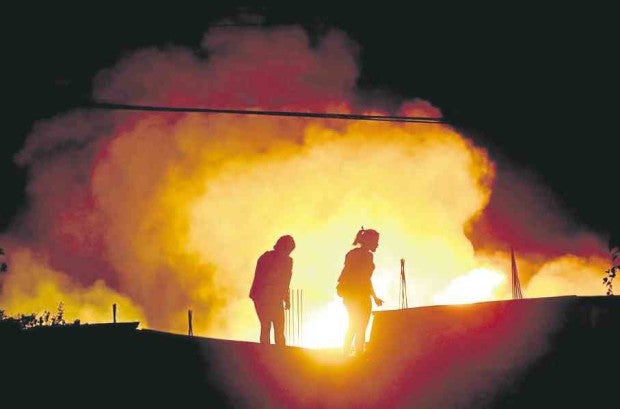 The Bureau of Fire Protection (BFP) and forensic experts did not find any human remains during an initial search of the ruins of a six-hectare Japanese-owned factory in Cavite province that was razed by fire last week.

Supt. Roy Camarillo, chief of the police medico-legal team in Calabarzon (Cavite, Laguna, Batangas, Rizal, Quezon) region, said personnel of the police’s Scene of the Crime Operations, as of Monday, found no indication of people being trapped and killed when the fire broke out in the three-story building of the House Technologies Inc. (HTI) in General Trias town.

Cavite Gov. Jesus Crispin Remulla said the search on Monday had already covered half of the HTI building, located inside the Cavite Economic Zone.
The rest of the area, he said, was under the collapsed roof. Authorities would need heavy machinery to search through the debris, he said.

Jerome Sismaet, 34, a line leader or supervisor in HTI, was the lone fatality in the 46-hour fire that was put out on Friday afternoon. The blaze left over 100 employees injured.

Sismaet, a resident of Maragondon town, died in a hospital past midnight Sunday due to severe burns and a fracture in his pelvis.

“He was a line leader, who stayed behind to let his people go out [of the burning building] first,” said Remulla, adding that most of those in critical conditions were team leaders.

Colleagues and friends praised Sismaet and regarded him as a “hero.”

Alvin Ronsairo, who used to work at HTI, said Sismaet helped him with his tasks and was easy to get along with.

Sismaet also did well on the job—that was why he was promoted to being a team leader, he told the Inquirer.

HTI, which employs about 13,000 people, produces prefabricated houses and home fixtures, using materials such as treated wood. The company earlier said it lost between P10 billion and P15 billion to the fire.

The company on Monday resumed its operations in areas not affected by the fire, Remulla said.

In a separate telephone interview, Philippine Economic Zone Authority (PEZA) director general Charito Plaza said a woodcutter that malfunctioned caused sparks that started the fire. She said it quickly spread because containers of paint and sawdust were nearby.

“The company was compliant [with safety and fire standards]. It was an accident,” she said, quoting the results of a BFP investigation.

Plaza said HTI sent its employees to its four other sister companies under the House Research and Development Group of Companies until it finishes rebuilding its facility. The company also agreed to shoulder the funeral and medical expenses of the victims.