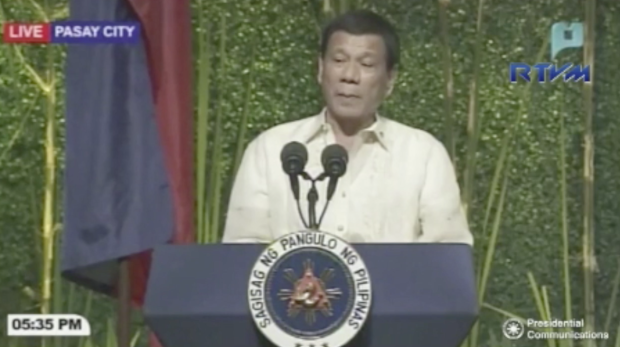 MANILA — President Duterte said on Monday he has opted not to pursue the creation of a truth commission to look into the disastrous counterterrorism operation in Mamasapano, Maguindanao, which led to the massacre of 44 police commandos on Jan. 25, 2015.

“I am not going ahead with the creation of a commission because apparently the Ombudsman has said that (a case) is still pending before them,” the President said at the launching of the tax campaign of the Bureau of Internal Revenue.

“I do not want to have a multiple incongruity especially if one finding fights with the other. So I will just wait (for the results of the Ombudsman’s investigation),” he told the gathering held at the Philippine International Convention Center.

Last Jan. 24, Mr. Duterte announced his decision to form a seven-member commission to find out what caused the botched raid during a dialogue in Malacañang with relatives of the Special Action Force (SAF) troopers who were killed in the Mamasapano debacle.

He also openly berated his predecessor, former President Benigno “Noynoy” Aquino III, for sending the SAF personnel to the “lion’s den… to be eaten by death,” claiming they were not trained in rural terrain combat.

The Chief Executive also disclosed that Aquino’s youngest sister, well-known actress and television host Kris Aquino, had sent him a text message asking if he would bring criminal complaints against her brother.

In reply, he said: “No Kris. I am not out to find faults. I just want to know the truth.”

Mr. Duterte said he wanted to know why the government did not send the military’s air assets to extricate the police commandos who were pinned down by heavy fire from suspected Moro rebels.  SFM