Slain South Korean businessman Jee Ick-joo was given a memorial service inside the police camp where he spent agonizing hours before rogue anti-drugs police officers snuffed his life out late last year.

Wails echoed through the Philippine National Police (PNP)’s Multi-Purpose center at Camp Crame as Jee’s family, friends, employees, other members of the Korean community and some police officers paid their respects to the Pampanga-based businessman on Monday.

It was Jee’s widow Choi Kyung-jin who requested that the memorial be held at Camp Crame, according to PNP chief Director General Ronald “Bato” Dela Rosa.

In a message he delivered before the Korean audience, Dela Rosa condemned the incident that had put the PNP in the center of controversy as it involved some members of the now defunct PNP’s Anti-Illegal Drugs Group.

He also assured Korean nationals that they could continue their businesses in the country without fear of any violence, adding that the PNP will remain true to its mandate to serve and protect.

After the memorial, the police chief admitted that facing the Korean community was an “awkward” moment for him.

That is why Dela Rosa said the PNP is trying to have “the most credible investigation that will come out so they would be satisfied.” 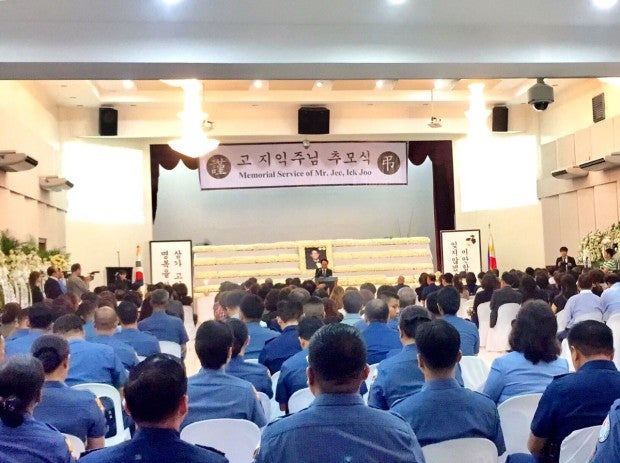 In his message, South Korean ambassador to the Philippines Kim Jae-shin said Jee’s death shocked and alarmed the Korean community because he was an “innocent and hardworking businessman” who “showed his love and respect for the people around him.”

Jee provided Korean and Filipino employees to casinos in Pampanga as he operated a manpower services there. Before putting up his own business, he was an executive of Hanjin, a Korean shipbuilding firm.

“We have encountered some incidents as such in the past but they were usually related to criminals themselves but this time, it was an innocent member of our community, an innocent and hardworking businessman just like most of us,” Kim said.

Employees of Jee, who fondly called him “Tatang,” also set free white balloons written with words “You are loved. You are missed. You are remembered. #Tatang #IckJooJee” at the site where he was killed.

“We will always be proud to have a boss like you and even if we need to transfer to other companies, we will proudly tell them that we were the employees of Mr. Ick-joo Jee,” one of them said in their eulogy.

In October, the group of AIDG cop SPO3 Ricky Sta. Isabel, while on board a black SUV, allegedly brought Jee to Crame on the night he was abducted from his home in Angeles, Pampanga. Sta. Isabel reportedly strangled Jee to death while his car was parked near the Police Community Relations Group inside Crame./ac