Don’t play, play – Singlish is studied around the globe

Blogger Wendy Cheng’s Web video series Xiaxue’s Guide To Life and Jack Neo’s Ah Boys To Men film franchise are well-known shows among Singaporeans. For one thing, they are filled with colloquial terms, local references and copious doses of Singlish terms such as “lah” and “lor”.

But they are not merely for entertainment. In recent years, such shows have found a place in universities around the world, where linguists draw on dialogues used in these local productions to introduce to undergraduates and postgraduate students how Singlish has become a unique variety of the English language.

This comes even as concerns have been raised over how Singlish could impede the use of standard English here.

From Italy and Germany to Japan, at least seven universities around the world have used Singlish as a case study in linguistics courses over the past decade. This is on top of more than 40 academics outside of Singapore – some of whom were previously based here – who have written books or papers on Singlish as part of their research. 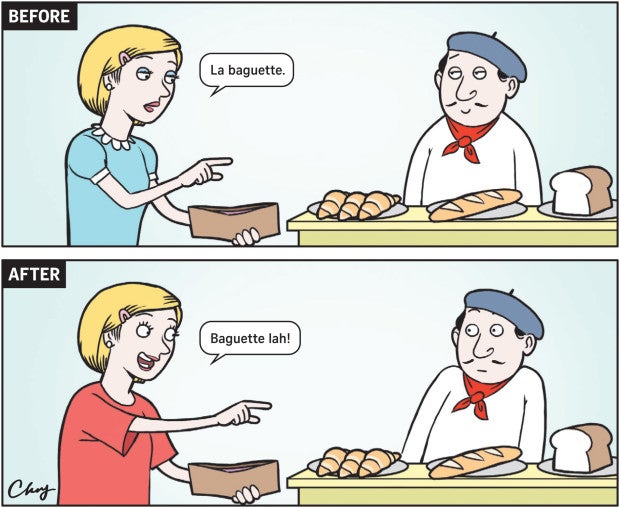 Last December, assistant professor of linguistics at Boston University Neil Myler introduced Singlish in a module examining the relationship between accents, dialects and society that was taken by 60 students, after coming across the language variety in his own reading.

“I can’t help but be fascinated by Singlish, which has a number of grammatical properties not shared by other English varieties,” said Dr Myler. Among its unique features are particles, or “little words” such as “lah”, that go at the end of sentences and “indicate all sorts of subtle meanings”, he said.

On top of giving a brief general overview of the linguistic features and history of Singlish, Dr Myler used two video clips in his classes.

One was of Ms Cheng explaining Singlish terms, such as how words such as “liddat” and “neh mind” are contractions of phrases “like that” and “never mind”. The other video had Singlish dubbed over a clip from Disney’s animated film Frozen.

Dr Myler said: “I thought the students would find (Singlish) interesting, since the differences are so striking and its history as a contact variety is fascinating too.” Contact variety refers to a language that has been influenced by words used by several ethnic groups.

In Singlish, English words are mixed with terms from Malay, Mandarin, Chinese dialects and Tamil.

Dr Jakob Leimgruber, an assistant professor at the English department of the University of Freiburg in Germany, has been introducing Singlish in classes since 2007. These include courses in sociolinguistics at Britain’s Oxford University, the University of Lausanne in Switzerland and in his classes at Freiburg.

Dr Leimbruger noted that in Singapore, English is in constant contact with other languages. This means there is no end to potential changes in Singlish.

“(This is what) makes (Singlish) so interesting for both researchers and students,” he said.

He said “lah” is his favourite Singlish term because Singaporeans appear to attach a lot of significance to it (see video).

In addition to work by academics, more than 20 Singlish words were added to the Oxford English Dictionary last year.

There are usually about 30 students in Dr Leimbruger’s undergraduate introductory classes, and he has marked about 20 undergraduate essays and five theses submitted by students who have chosen to do research on Singlish.

Snippets from films such as Ah Boys To Men and Singapore Dreaming are also used in his classes.

“They are nice because they also feature full-blown code switching, which is often absent from newscasts,” said Dr Leimgruber, who added that words such as “kiasu” are a favourite with students.

Code switching refers to how someone may alternate between two or more languages or language varieties in a conversation.

Dr Leimgruber said Singlish should not be seen as merely ungrammatical English, though scholars are divided on whether it can be defined as a creole language.

“I, like all other linguists working on Singlish, consider it an independent variety of English that comes with its own set of grammatical rules,” he added.

Ms Celia Daggy, 19, an American freshman studying viola performance at Boston University, said she “knew next to nothing about Singapore”, but had a chance to learn about Singapore culture through the class last month. “It was pretty cool to see a mixing of Eastern and Western languages,” she said.

Concerns about how the use of Singlish may displace the mastery of standard English by Singaporeans have been raised in the past.

Last year, the press secretary to Prime Minister Lee Hsien Loong responded to an opinion piece on the flourishing of Singlish in The New York Times by Singaporean poet and literary critic Gwee Li Sui, saying that the use of Singlish “will make it harder for Singaporeans to learn and use standard English”.

Mr Goh Eck Kheng, chairman of the Speak Good English Movement, had also said that not everyone who speaks Singlish can speak English.

“There are those who think Singlish is English. Others habitually use ungrammatical, fractured English,” he said last year.

Dr Ng E-Ching, a lecturer at the National University of Singapore’s English department, said the increasing use of Singlish has accompanied increasing use of standard English here, and that it is difficult for critics to “hold back the tide” when it comes to Singlish usage.