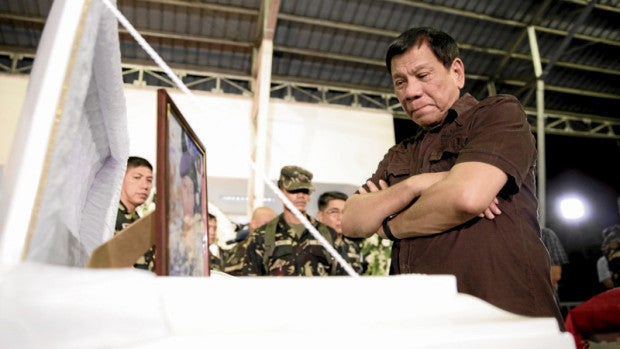 PRESIDENT Duterte pays his respects at the wake of one of the four soldiers killed by the NPA. MALACAÑANG PHOTO

Luis Jalandoni, senior adviser to the National Democratic Front’s (NDF) negotiating panel, said on Monday that President Duterte’s sudden termination of the peace talks would take effect only one month after serving a written notice to terminate the process as previously agreed upon by both sides.

As such, NDF holders of safe conduct passes under the Joint Agreement on Safety and Immunity Guarantees (JASIG) cannot be arrested and detained during this period, he said.

JASIG is an agreement between the government and the NDF signed on February 24, 1995. It protects from arrest negotiators, consultants, staffers, security and other personnel who participate in the peace negotiations.

Jalandoni said the President terminated the talks because he was just angry at the New People’s Army (NPA), the armed wing of the Communist Party of the Philippines, after visiting the wakes of three soldiers killed alleged by communist guerillas.

The President noted that the killings and the abductions of three more soldiers took place even before the February 10 effectivity of the NPA’s lifting of ceasefire. In retaliation, the government also lifted its own ceasefire and declared that the military will go after NPAs and resume rescue operations for the kidnapped soldiers.

The President called the NPAs “terrorists” not worthy of government’s attention. He said NDF negotiators facing charges in court would be recalled from peace negotiations abroad and returned to jail immediately. He also said there would be no resumption of peace talks under his watch.

Jalandoni, however, insisted that the peace talks could continue even without a declaration of a unilateral or bilateral ceasefire.

He accused the Armed Forces of the Philippines (AFP) of first violating its own ceasefire by attacking more than 500 villages in 43 provinces and illegally occupying schools and health centers on the presumption that these were communist-infested areas.